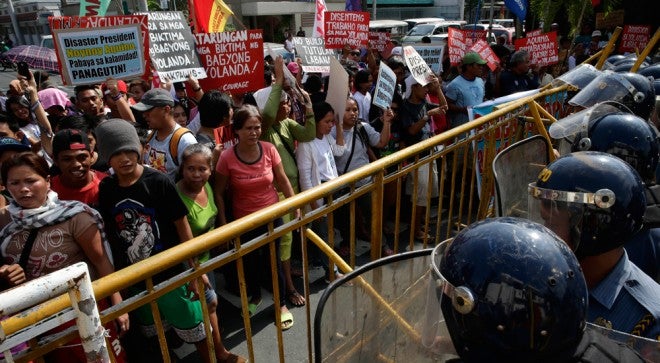 Protesters, some of them typhoon survivors, face riot police as they gather along a street leading to the ancestral house of Philippine President Benigno Aquino III to protest the alleged slow response by the government in the rehabilitation of the typhoon-stricken central Philippines as well as to call for transparency in the release of foreign aid to typhoon victims Wednesday, Jan. 8, 2014 at suburban Quezon city northeast of Manila, Philippines. Typhoon Haiyan, called Yolanda locally, struck the central Philippines two months ago on Nov. 8, 2013, leaving a wide swath of destruction and killing more than 6,000 people. AP

In Iloilo City, about 200 protesters held a candle-light protest at Plazoletagay, the city’s main intersection.

“It’s been two months already but the assistance given to fishermen who lost their boats and the hundreds of thousands who lost their homes are from private donors and foreign relief groups. Where is the government?” said Maura Abellon, chair of Kadamay-Panay and Guimaras.

Abellon said hundreds of thousands of typhoon victims whose houses were destroyed or damaged were living in shanties, patched up houses, tents and evacuation centers because the government housing assistance from P10,000 to P30,000 per family had not yet been given to the victims.

“The longer the assistance reaches the victims, the heavier the burden on already impoverished residents. They are becoming victims for the second time,” Abellon told the Inquirer.

Kadamay called for the immediate release of donations and government funds for livelihood and housing assistance and the rehabilitation of communities.

In Roxas City in Capiz, hundreds of protesters led by Kadamay and Bayan joined a rally in front of the provincial capitol before holding a torch march in the city’s main streets. The protesters were scheduled to hold an overnight camp-out at the city bandstand.

In the capital town of Kalibo in Aklan province, protesters held a picket in front of the provincial capitol.

The Aklan chapter of Kadamay was set to file a petition in the Department of Social Welfare and Development calling for the immediate release of calamity funds for the rehabilitation of typhoon-devastated communities in the province.

The provinces of Aklan and Capiz and the northern areas of Antique and Iloilo were among the worst hit by “Yolanda,” which packed winds reaching more than 300 kilometers per hour that ravaged communities.

The Office of Civil Defense (OCD) in Western Visayas reported that 273 persons died in the region and 3,924 others were injured. At least 28 remained missing and presumed dead.