Now, a healthy use for tobacco | Inquirer News

Now, a healthy use for tobacco 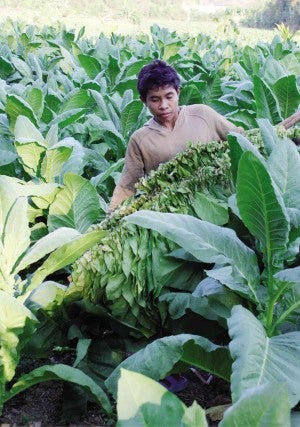 TOBACCO grown in the Ilocos region is used as a cheaper and effective alternative to chemical pesticides and fertilizers in fish ponds. LEONCIO BALBIN JR.

There is more to tobacco leaves than being rolled into cigars and cigarettes. They can also be healthy and environment-friendly pesticide and organic fertilizer, rolled into one.

Called “Tobacco Dust Plus” (TDP), the product is commercially manufactured by the National Tobacco Administration (NTA) in a plant in Sto. Tomas town in La Union province and has gained popularity among fish pond owners in Pangasinan and neighboring provinces as a cheaper and effective alternative to harmful chemical pesticides and inorganic fertilizers.

“TDP was the outcome of more than a decade of research and field trials of collaborating agencies that date back to the 1990s,” says Cesario Sambrana, NTA branch manager in Rosales town in Pangasinan.

The agencies include the Southeast Asian Fisheries Development Council, Iloilo State College of Fisheries, Philippine Council for Aquatic and Marine Resource Research and Development, and the Bureau of Fisheries and Aquatic Resources (BFAR).

Launched in 2012, the product is made mainly of tobacco dust, the tiny specks of dried tobacco leaves that fall off when the leaves are redried and ground in a plant. These are pulverized and treated to standardize the potency of its active ingredient, nicotine.

Many fish farmers in Pangasinan and La Union have been using tobacco when they prepare their ponds for stocking, says Nestor Domenden, BFAR regional director.

“What they have been using are tobacco sweepers, those shreds of tobacco leaves that are swept in the floors of redrying plants. This has a lot of dust particles,” Domenden says.

The sweepers are spread over the dry pond bottom and left there for three to four days to kill predators that will later eat newly stocked fingerlings and compete for food, space and oxygen in the pond.

These are later plowed into the pond bottom, becoming an organic fertilizer. The pond will have to be dried again and later allow water to gradually come in for “lablab” to grow. Lablab, an algae with an organic component, grows naturally on the bottom of shallow fertile ponds.

This natural food is said to be the reason pond-cultured milkfish (bangus) in Dagupan has a distinctive taste, compared to those fed with commercial feed.

Sambrana says users of tobacco sweepers did not get similar results. Some had said it was not effective; others said it killed all predators.

“This is because the strength of sweepers depends on the kind of tobacco where the sweepers come from,” Sambrana says.

Among the three types of tobacco plants grown in the country, Virginia tobacco has the lowest nicotine content. Burley tobacco comes higher, while the native tobacco has the highest.

“So, if what you got are sweepers from a Virginia tobacco, that’s not strong. In the redrying plant, they process tobacco leaves according to type. They are not mixed,” Sambrana says.

TDP’s popularity among pond owners and operators is attributed to its dual function, making it cheaper and safer to use. “You don’t have to buy a pesticide and a fertilizer separately,” Domenden says.

“It’s environment-friendly because it is organic. No residues and no harmful chemicals will be diluted to natural bodies of water,” he says.

During the field trials that NTA and BFAR conducted in different provinces of Luzon, pond owners saved at least P28,000 in production cost for every hectare of pond.

More importantly, the mortality rate of fingerlings went down from 20 percent to only 5 percent, giving pond owners bountiful harvests.

“I still have to hear a pond owner who used TDP complain that his performance is just equal to his previous cropping schedule,” Domenden says. “All of them said they had better harvests.”

In many cases, pond operators no longer have to use commercial feed for their stocks, yielding an organic fish produce.

“The use of commercial feed depends on the stocking density. If it’s higher than the required carrying capacity of a naturally grown pond, you will need supplemental feed, but it’s very minimal,” Domenden says.

He has advised pond owners to ensure that the natural food growth and stocks are balanced so they will not have to use supplemental feed.

“Our direction is to create an office that will certify a fish product whether it was grown organically or not,” he says.