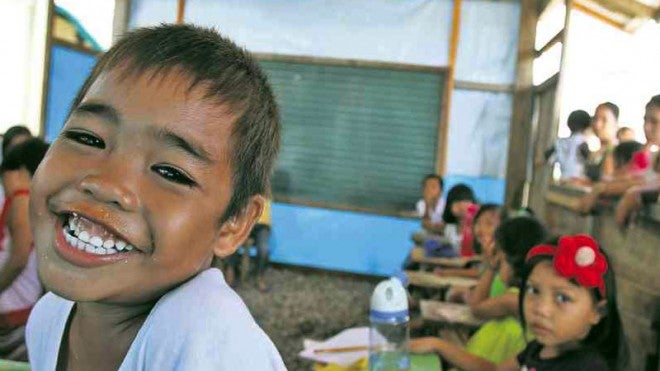 CLASSES RESUME. Rex Tismo, 5, is all smiles as classes in kindergarten and other levels resume at Manlurip Elementary School in Tacloban City, two months after Supertyphoon “Yolanda” destroyed schools and houses, and killed thousands on Nov. 8, 2013. Only about one out of three students enrolled at the school before the typhoon returned for the resumption of classes. NIÑO JESUS ORBETA

Restor was happy to return to school and see her students again, but she also felt sad because only 32 of her original 67 students showed up.

“I just hope and pray that they just left the city and nothing bad happened to them,” she said.

So far, four students of Manlurip Elementary School have been confirmed dead.

Only 36 percent (137) of the 383 pupils enrolled at the elementary school before Nov. 8, 2013, came back for the resumption of classes that started with the singing of the national anthem and ended with short physical exercises.

The Grades 5 and 6 students stayed at the 60-square-meter tent donated by the United Nations Children’s Fund (Unicef), while those in Grades 1, 2, 3 and 4 occupied the school buildings, which were covered with tarpaulin for a temporary roof.

Yolanda (international name: Haiyan) blew off the roofs and destroyed the windows of all of the six buildings of Manlurip Elementary School, which United Nations Secretary Ban Ki-moon visited last Dec. 21.

“We don’t expect all students to come to school today, as we were informed that many of them left the city. Some went to Samar, to Cebu, to Manila. Only around 50 percent of them returned to school,” said school principal Elenita Montalban.

Walter Cahindo, 10, and a Grade 3 student, said he was happy to return to school. His schoolbag was full of supplies given by Ban during his visit.

“I am looking forward to meeting my classmates again,” Cahindo said with a shy smile. “I’m now ready for classes.”

The students were happy and excited, and did not appear to have suffered trauma due to the typhoon, Sarmiento said in a phone interview.

The three schools visited by Yu have about 500 students each, she said.

Sarmiento said the DepEd regional office had initially monitored about 100 students killed during the typhoon.

Fate of many unknown

Principal Maria Evelyn Encina said the fate of many others and their families remained unknown.

“They could be in evacuation centers or could have been taken in by their relatives in the mass evacuation that followed,” Encina said. “But we can’t know for sure. We just want to let them know wherever they are that we are here waiting for them.”

She lamented that only about 50 percent of the school’s nearly 1,000 pupils were back.

In the makeshift tents, mothers refused to leave despite appeals from teachers to let the children slowly resume their daily routine.

What passes for a community learning center now are desks under a white tent donated by relief organizations.

It sits about 50 meters from the sea, in an area that the government has officially dubbed a “permanent danger zone,” Encina said.

“We need a more permanent structure for the longer term but in the meantime, this will suffice,” Encina said.

Yolanda cut a vast swath of destruction with its powerful winds that topped 315 kilometers an hour. It also triggered storm surges, which swamped large areas, leaving nearly 8,000 dead or missing and nearly 30,000 others injured.

It also displaced 4 million people, 1.7 million of them children, according to Unicef.

Sarmiento said officials did not expect actual classes to start immediately, as they were still accounting for the students and even the teachers.

Unicef, along with other groups, is leading a campaign to help some 550,000 children, teachers and day-care workers return to schools.

“Unicef’s objective is to ensure that children affected by Typhoon Yolanda return to quality learning as soon as possible,” said the group’s officer in charge in the Philippines, Angela Kearney.

By reestablishing a daily routine, Unicef said it hoped to transform schools into “safe spaces” that provide some sense of normalcy.

It said that with children back in school, parents would also have more time to rebuild their ruined homes.

But with memories of the surging, towering waves still fresh, mother of six Milet Labrado, 42, was not taking any chances.

“The school is just too near the sea and we survived by clinging to each other,” she said, while anxiously watching her youngest, a 6-year-old boy, mingle with his classmates.

“I still see my neighbors being taken away by the waves in my dreams every day,” Labrado said.

“I am not yet prepared to leave my boy and entrust him to anyone,” she added.—With a report from AFP