“There are outbreaks last year and it is going on right now” Tayag in an interview with Inquirer Radio 990AM. 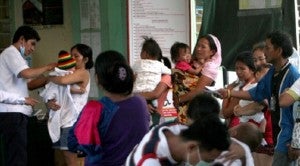 Children inflicted with measles queue up at the San Lazaro Hospital in Manila. The Department of Health declared Measles Outbreak with the increasing number of measles patients. RICHARD A. REYES/PHILIPPINE DAILY INQUIRER

Tayag said the measles outbreak, which started last year, would linger until summer.

“That’s when the measles will peak (summer) and we hope we can contain it so we can reduce the number of children getting sick and even adults because measles spread easily because it is airborne.”

Tayag, known for his dance moves to campaign for crucial health programs, said the local government units are in charge of the vaccination of children in their areas. The Health Department only supplies the vaccines.

“The local government’s primary responsibility is to make sure that the vaccines the Department of Health buys and distributes to them are actually used,” he said.

According to Tayag, measles vaccines should be administered twice – first when a child is nine to 11 months old and another when the child is 12-months-old to 18 months-old.

He added that if mothers or relatives would not bring the children to the health centers, DOH personnel would come personally to the houses to administer the measles vaccine.