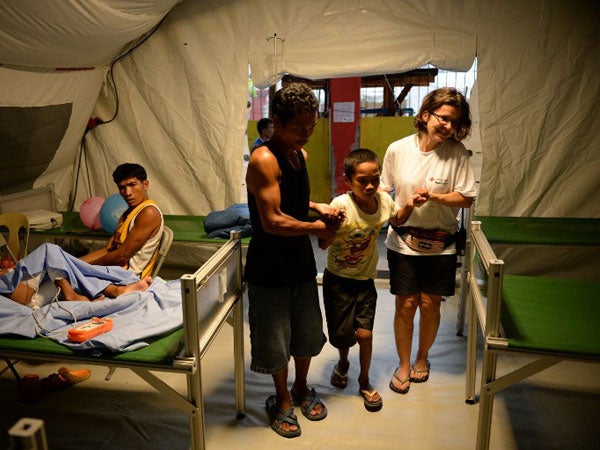 BASEY, Samar – A devastating typhoon that killed thousands of people in the Philippines has unexpectedly given young traffic accident victim Mario Renos hope that he could one day walk again.

Hit by a motorcycle while walking to school months before Supertyphoon “Yolanda” (international name: Haiyan) struck the central islands, the 13-year-old’s shrivelled legs are taking their first steps to recovery at a Red Cross tent hospital put up in Basey town.

“I want to go back to school,” said Renos, gritting his teeth as he held on to metal railings with both hands while trying to negotiate an improvised exercise stall made of lumber from typhoon-felled coconuts.

“There is no reason he can’t walk again,” said Norwegian nurse Janecke Dyvi as she coaxed the boy across.

Staffed by doctors and nurses from 10 European nations and offering its services for free, the $1.6 million hospital has uncovered a huge unmet need on Samar island, one of the country’s poorest regions.

Survivors of the ferocious winds and giant waves that flattened Basey’s coastal neighbourhoods on November 8 are now flocking by the thousands to the medical facility that locals have affectionately named the “Norwegian Hospital”.

And it is not just those injured directly by the typhoon who are feeling the benefits of such aid.

Pitched beneath the damaged municipal gym, the hospital’s six air-conditioned tents have brought relief for a multitude of injuries including centipede bites, harelips, traffic accidents, strokes and burns, and other ailments and conditions unrelated to the typhoon.

The temporary replacement is the same type as those put up by the Red Cross in conflict areas around the world, and is being deployed in the Philippines for the first time, Engkrog told AFP.

It is part of the aid agency’s contribution to an international humanitarian effort that is evolving from meeting the survivors’ immediate needs, such as food and shelter, to addressing their longer-term issues.

United Nations agencies and international aid organisations are also involved in the effort across the disaster zone, which covers an area the size of Portugal.

Until “Yolanda” hit, the boy struck by a motorcycle in March last year had no access to a physiotherapist and his legs had atrophied because he was bedridden at home, forcing him to stop attending his fifth-grade classes, nurse Dyvi told AFP.

“Maybe they don’t have the money to pay for the treatment,” she said.

The district hospital is to be rebuilt this year, he said, but the authorities do not yet know when it will reopen.

“While the rebuilding is taking place, it is important that temporary facilities are available so that basic health services are delivered,” Tayag said.

Nearly 4,000 patients have been treated in the Red Cross hospital since late November, said Atishay Abbhi, spokesman for the Red Cross contingent at the disaster zone.

He said the aid agency has also built four water treatment plants across Samar, a region largely populated by coconut farmers and fishermen.

Starting this month, the Red Cross will provide equipment like boats and hooks to fishermen and seeds for farmers as well as fund cash-for-work schemes for displaced laborers. Cash grants will also be set up to help small businesses get back on their feet.

About 60 local medical personnel are now being trained on the job to take over when the Europeans are gone, Engkrog said, adding all the hospital equipment will also be handed over to Filipino authorities.

The Red Cross has already shut down a 100-bed tent hospital it had put up in Ormoc, a city on neighboring Leyte island, where the local health needs were not as acute once typhoon-induced injuries were dealt with, Engkrog said.

Passing on medical expertise to the locals is vital if people are to continue benefiting over the coming months and years.

As Abhi, the Red Cross spokesman, put it: “We are not going to be (here) forever.”

Read Next
French couple sued for not helping drunk student who drowned
LATEST STORIES
Jaja Santiago powers Japanese squad to semis stint
Neda seeks Congress OK of key economic bills before solons get busy for 2022 polls
Hotdog bassist Dennis Garcia remembered by daughter after his death: ‘Glad I have your songs’
House to hold crucial session in Batangas on Jan. 22
‘A greener, cleaner tomorrow’: A how-to guide for Filipinos who want to help with today’s energy crisis
MOST READ
Palace: Crisis over ABS-CBN franchise unlikely
Motorcycle taxis ‘illegal’ starting next week — LTFRB board member
Panelo: Duterte only wants to emulate strong political will of Marcos
Marcos monument beside Aquino’s stirs Tarlac town
Don't miss out on the latest news and information.