Campaign on to save Navotas bird haven | Inquirer News

Campaign on to save Navotas bird haven 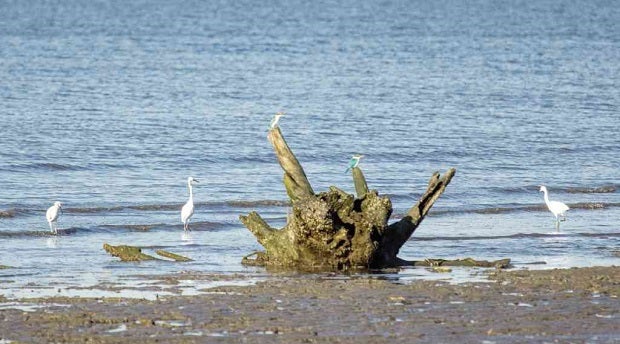 NOT AS PUBLICIZED as the Las Piñas-Parañaque bird sanctuary, Sitio Pulo in Navotas City has a mangrove forest and avian feeding ground increasingly threatened by pollution. Photo by Jilson Seckler Tiu

The morning low tide revealed the island’s natural charms: a vast and largely uninhabited beach, a thick blanket of mangroves.

But it also showed its ugly, manmade side: The assortment of trash washing up ashore, from plastic bags to rubber shoes, food wrappers to motorcycle helmets, much of it tangled up with the mangrove growth. 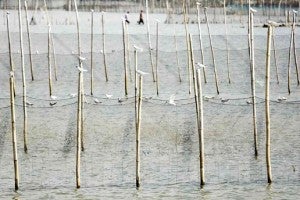 THE NAVOTAS Mudflats serve either as a home or stopover for at least 11 bird species, according to a 2011 DENR survey. Photo by Jilson Seckler Tiu

This is, after all, not Palawan or Boracay, but the Navotas Mudflats on Sitio Pulo, Barangay Tanza, a part of Navotas City facing Manila Bay.

But something else about the area has lately caught the attention of environment and local government officials.

“We had the biggest sighting of migratory birds here when we last counted them in October. And the mangrove trees should have died by now with their roots choking in garbage, but they have adapted and are doing well,” said Maria Teresa Aquino-Relos, a botanist assigned by the Department of Environment and Natural Resources (DENR) to monitor the mudflats.

Citing this abundance of plant and animal life despite the encroaching pollution, Navotas officials, starting with the village leaders of Barangay Tanza, are asking the government to declare the mudflats and Sitio Pulo a critical habitat and eco-tourism area.

“Once this is declared (as such), more funds from the national government will come in, which could be used to increase the protection we provide for the area,” Relos told the Inquirer. “We can do a more intensive cleanup and hire more people to guard and enforce environmental laws.”

Covering about 30 hectares, Sitio Pulo is a long and narrow island connected to the mainland by a 500-meter-long bamboo bridge. It’s currently home to 137 indigent families, mostly occupying the southern tip. 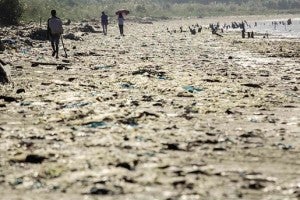 A BEACH that attracts no bather on Sitio Pulo, thanks to garbage washing up ashore. Photo by Jilson Seckler Tiu

“In the 1960s and up to the  ’80s, Barangay Tanza and Sitio Pulo were really beautiful. Mangrove trees covered the entire island, and even the coastal areas of the barangay,” said the village chair, Carlito de Guzman.

But it all changed in the 1990s, when informal settlers began moving in, cutting down mangroves for firewood and catching birds for food.

De Guzman said the barangay had declared Sitio Pulo a marine tree park, which on paper means the villagers themselves must protect it or at least keep it green. They had done this so far through regular tree-planting activities, he said.

According to a January 2011 survey conducted by the DENR, about 20 plant species, mostly mangroves, thrive there, with the bungalon variety covering the largest area.

As for fauna, the survey recorded at least three species of crabs, 14 species of shellfish and about 11 bird species. Some 2,000 birds—including egrets, terns, kingfishers, gulls and plovers—come to the island during winter in the northern or southern hemispheres.

“The numbers fluctuate throughout the year, but they are highest in April and October,” Relos said.

She made special mention of the Chinese egret, formerly a seasonal visitor which has now made Sitio Pulo its home. “Every time we are asked about the importance of protecting Sitio Pulo, we always cite the case of these birds. We hope this area would be protected before it’s too late.”

Though hardly a newsmaker (unlike the Las Piñas-Parañaque bird sanctuary), Sitio Pulo has been attracting professional bird-watchers even from abroad.

This is why the barangay, in partnership with a private organization, is planning to put up a boardwalk going to the island, down to the mangrove area, for better public access.

“Right now, boats cannot dock near the shore because of the mud. Once the boardwalk is in place, it will be easier for people  to go to the mangroves, whether they are bird-watchers, tourists or volunteers who want to help us protect or clean the island,” De Guzman said.

A floating restaurant could be added later for a more enjoyable visit, he added. “It can pick up passengers from the bus terminal on C4 Road and drop them off at the boardwalk.”

The barangay, the city government and other organizations conduct regular cleanup activities on the island, but De Guzman and Relos said these may not be enough to restore the island’s pristine condition.

“The trash is just overwhelming. We usually bring 200 sacks and they are easily filled, with a lot more garbage left,” he said.

And there’s also the issue of the informal settlers on the island. “Some families there make charcoal for a living. We have asked them not to cut the mangroves for making charcoal, but we get reports that they still do. We asked them again to stop producing coal this month, and we hope to relocate them soon away from the island,” De Guzman said.

The barangay currently pays two men to watch over the mangroves, especially those that were recently planted.

But perhaps the biggest threat faced by the island’s ecosystem is something the Navotas City government and the DENR itself have allowed to exist right next to the island: a 40-hectare sanitary landfill.

“It’s the biggest irony on this island. We have here a haven for birds, but with a landfill sharing the land,” Relos said. “Ideally, the dump should not be there.”

The city government is also reportedly planning to reclaim parts of the coastal area for commercial or industrial use, which may also affect the island.

“We support the eco-tourism and environmental protection of Sitio Pulo, and we are joining the tree-planting and cleanup activities and other plans for the area,” Tiangco said.

“Regarding the reclamation, that’s still on the drawing board right now. But as much as possible, if we can achieve a balance (between) development and preservation, we will pursue that. I don’t believe we need to choose just one or the other. We will seek a win-win situation if the reclamation is approved,” Tiangco added.