Bacalzo turns over reins of PNP to Bartolome 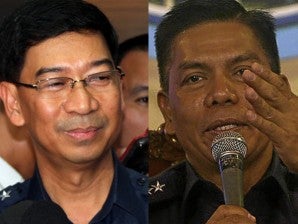 President Benigno Aquino III and incumbent and past executive and police officials  witnessed the changing of the guard in ceremonies at the Camp Crame national headquarters Friday.

Bacalzo relinquished command of the PNP ahead of his mandatory retirement on September 15, his 56th bday, capping a 38-year career in the police service.

With Bacalzo is his wife, Librada, as he was awarded a Medalya ng Katapatan sa Paglilingkod.