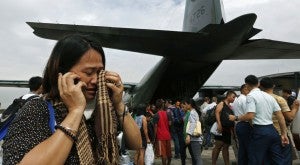 A survivor from Tacloban, which was devastated by Typhoon Haiyan cries while taking on a mobile phone after disembarking a Philippine Air Force C-130 aircraft at the Villamor Airbase, FILE PHOTO

MANILA, Philippines – Survivors of Supertyphoon “Yolanda” (Haiyan) will continue to get help this year even after the government ends the distribution of relief goods in March, Malacanang said Saturday.

Deputy presidential spokesperson Abigail Valte said, however, that even if the Department of Social Welfare and Development (DSWD) would end its distribution March 31, it would still assess the situation and come up with the appropriate assistance.

“The DSWD is assessing the situation of the affected families. It will continue to give assistance especially to those that need it,” Valte said on radio.

She said the government may extend shelter assistance to the affected families.

She said the government also extended such help to families in Zamboanga City who were displaced by the siege between government forces and the Moro National Liberation Front (MNLF) led by its chairman Nur Misuari last September.