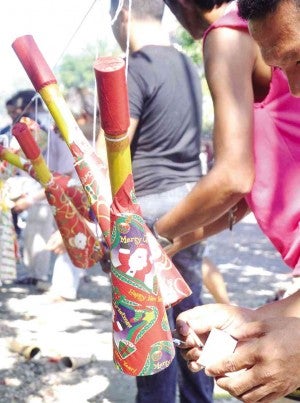 THE CAMPAIGN against firecrackers has no effect on the village of Pogo in Dagupan City where residents light firecrackers to celebrate the New Year at noon of Jan. 1. WILLIE LOMIBAO/CONTRIBUTOR

BOCAUE, Bulacan—As expected, the industry that profits from fireworks and firecrackers has objected to a government plan to ban their sale and use.

No. 7183 in 1992 to regulate the manufacture and sale of firecrackers and other pyrotechnic devices.

He also said people who could no longer use firecrackers may resort to firing their guns during the New Year’s Eve revelry, increasing cases of indiscriminate firing.

Two children in the Ilocos region were killed by stray bullets on Dec. 31, 2013.

Cruz said the government had banned the sale of piccolo and the  fireworks trade centered in Bulacan province had abided by that rule. But piccolo is smuggled from China and has been distributed widely despite the law, he said.

This was a problem plaguing the Bureau of Customs, he said, but the campaign against firecrackers was attributing firecracker injuries to the legitimate fireworks businesses in Bulacan.

Bocaue has been host to 300 fireworks stalls that operate on the days running up to New Year’s Day. The stalls also cater to other occasions all year round, from weddings to fiestas.

“Even progressive countries have legitimate fireworks industries. The government should support the industry by teaching people how to use firecrackers properly to reduce injuries,” said Mayor Eduardo Villanueva Jr. of Bocaue town.

Mayor Bartolome Ramos of Sta. Maria town agreed. His town hosts the factories from where 80 percent of the pyrotechnic products sold in Bocaue come. He said Bulacan manufacturers have also improved the safety features of the fireworks.

According to him, the proposed ban was “an old issue that never prospered because it would affect hundreds of people.”

Vimie Erese, PPMDAI president, said a ban would take away the livelihood of workers employed by 10,000 factories in Bulacan and other provinces.

Cruz said the Department of Health had addressed this problem by pursuing a ban instead of teaching people the safe way of igniting firecrackers, such as the appropriate distance they should maintain before lighting these devices.

He said this was the reason the 10-year campaign against firecracker use has not been successful.

“They should include the safe use of firecrackers in school curricula. We all went through childhood and we used to be attracted to lights, sounds and explosive fires,” he said.

Annie Dinglasan, a fireworks stall owner, said her business has not harmed her grandchildren because she taught them well about fireworks safety procedures. Carmela Reyes-Estrope, Inquirer Central Luzon