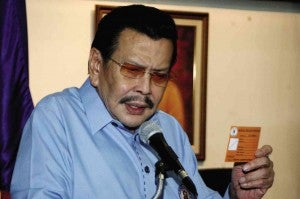 At least 120 indigent residents in Manila made up the first batch to receive the so-called Orange Cards that would entitle them to free medical services under the city’s revised public health system.

Manila Mayor Joseph Estrada, his wife and former Sen. Loi Estrada, and Vice Mayor Francisco “Isko Moreno” Domagoso on Friday led the distribution of the cards to the initial recipients, 20 from each of the city’s six districts.

He noted that the previous administration under then Mayor Alfredo Lim provided free medicine and healthcare for all regardless of economic status, but “while it was a good idea, it drained the city’s finances.”

The former president noted that the previous scheme was “abused” because even those who could afford to pay were given free services.

Estrada said Loi and his sister Pilarica, both medical doctors, recommended the Orange Card Scheme after he asked them to evaluate the current system used by city-run hospitals.

“The Orange Card will respond to my mandate to reform the health system of Manila and at the same time address the medical needs of the indigents in a most equitable and efficient manner,” he said.

Under the new system, the hospitals’ medical social service units in coordination with the Department of Social Work and Development will screen the beneficiaries.

Another category of beneficiaries will receive Blue Cards entitling them to a 50-percent discount.

Non-card holders would be charged for hospital services based on minimal, government-approved rates, Estrada said.

“All resources available in the hospital will be extended to the holders of the Orange Card,” according to Dr. Arsenio Pascual III, assistant medical director of Ospital ng Maynila.

Pascual said the card system would later be helpful in integrating patient data and other records of Manila’s six city-run hospitals.

Orange has long been the election campaign color of Estrada.