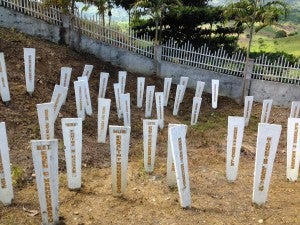 MANILA, Philippines—A defense lawyer in the Maguindanao massacre case has asked a Quezon City judge to dismiss a prosecution request that two witnesses who now live abroad be allowed to testify during the trial via video conference call.

In a three page pleading, counsel for Andal Ampatuan Jr., his father Andal Sr. and brother Zaldy, told Judge Jocelyn Solis-Reyes of Branch 221 of the Regional Trial Court that the suggestion to hear the witnesses’ testimony via conference call was not allowed under the Rules of Criminal Procedure.

Reblando is the widow of Alejandro Reblando, one of the journalists killed in the November 23, 2009 massacre, and now lives in Hong Kong where she has a pending petition for asylum. Momay-Castillo, daughter of photojournalist Reynaldo Momay, another massacre victim, works in the United States.

Reblando and Momay were two of 32 media workers killed along with 26 other people in the massacre, which has been blamed on members of the Ampatuan clan that had ruled Maguindanao for years and their supporters.

The prosecutors said the court could observe the witnesses’ demeanor as they testify through video conference call, and the defense could  cross examine them as well.

But in his opposition, defense lawyer Lou Bryan Macabodbod  said the testimonies should not be given consideration since the manner of presentation is without legal basis and is not expressly allowed under the rules.

He noted there is nothing in the rules that allows the presentation of witnesses through video conference calls.

“It means the prosecution cannot invent a procedure extraneous to that sanctioned by the law or they just use modes of evidence-presentation allowed under the existing rule,” he said.

He said the matter of the video conference call must be given serious thought, since there are issues such as the reliability of Internet connection in terms of speed, accuracy and stability.

“It does not confirm the prosecution’s allegations to justify its use, nor will it authenticate the identity of the person who claims to be a witness but who will never be subjected to this court’s punitive processes if contemptuous acts including perjury are committed,” the defense lawyer added.