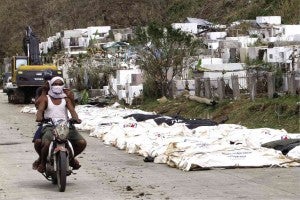 MANILA, Philippines—Ten more bodies had been recovered from the rubble since Dec. 29, bringing the death toll from supertyphoon ‘‘Yolanda’’ to 6,166 as of Friday, the National Disaster Risk Reduction and Management Council (NDRRMC) reported.

The NDRRMC also said the number of people injured by the killer typhoon rose to 28,626. The number of missing still stands at 1,785.

More than two-thirds of the death toll, or 5,768, were reported in the provinces of Leyte, Samar and Eastern Samar,

On Thursday, Presidential Communications Operations Office Secretary Herminio Coloma Jr. quoted rehabilitation czar Secretary Panfilo Lacson as saying that the government has formed a team to speed up the burial of 1,400 more bodies left on the streets in devastated areas.

The typhoon that affected 16 million people in the Visayas has caused massive damage to roads, bridges, facilities and other infrastructures worth P18.3 billion.

The same amount of damage to crops, livestock, fisheries and irrigation facilities in affected areas was also reported.

To date, a total of 890,895 homeless families, or more than four million persons, are still seeking shelter in evacuation centers almost two months after the deluge.