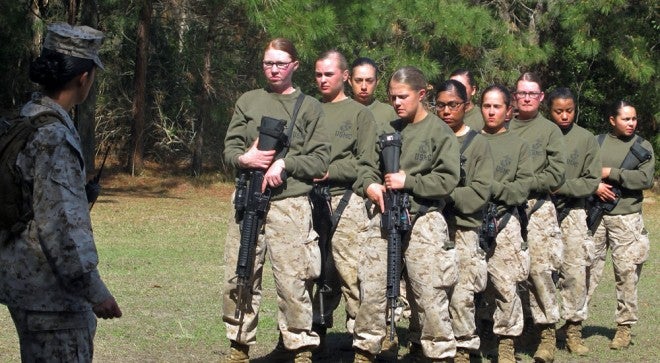 This Feb. 21, 2013 file photo shows female recruits at the Marine Corps Training Depot on Parris Island, S.C. More than half of female Marines in boot camp can’t do three pull-ups, the minimum standard that was supposed to take effect with the new year. So the Corps is delaying the requirement. All the service branches are working on devising standards, training and other policies needed to open thousands of combat roles to women in 2016. AP

WASHINGTON—The US Marine Corps has delayed a physical fitness requirement for women after more than half of female troops at boot camp couldn’t do three pullups, officers said Thursday.

The pullup rule was supposed to go into effect with the new year but has been postponed indefinitely as commanders were concerned about losing female Marines and prospective recruits, officers said.

The commandant of the Marine Corps, General James Amos, “has decided that Training and Education Command will continue to gather data and ensure that female Marines are provided with the best opportunity to succeed,” spokeswoman Captain Maureen Krebs said in a statement.

In the meantime, female Marines will return to a less-demanding “flexed arm hang” — which requires them to hold their chin above a bar.

Physical fitness tests, particularly upper body strength, have come under the spotlight as the Marine Corps and the Army prepare to open all combat jobs to women by 2016.

Military leaders say they are developing gender-neutral tests for combat roles, but some critics and lawmakers are worried that physical requirements will be watered down for female troops.

The new rule for a minimum of three pullups for female Marines was announced in November 2012, and the Corps gave women a year to train for the change.

But at the Marine Corps boot camp in South Carolina’s Parris Island, roughly 55 percent of women could not perform the minimum three pullups, Krebs said.

As a result, the change was delayed.

“The commandant has no intent to introduce a standard that would negatively affect the current status of female Marines or their ability to continue serving in the Marine Corps,” Krebs said.

The issue will be examined throughout 2014 but there is no deadline as to when the pullup rule might return.

Some male military bloggers complained that women were being held to a lower standard.

“I don’t ever remember a single male Marine in the fleet or support unit who could only do three pullups,” wrote blogger Ultimaratioregis.

“The physical disparity between an average male Marine and female Marine is gigantic.”

The blogger added that for infantry and other combat teams, physical strength was “a matter of life or death for the unit and the individuals in it.”

The physical fitness standards are supposed to reflect the strength required in a battlefield scenario, including lifting heavy ammunition, equipment or wounded comrades.

Male Marines have to perform 20 pullups to get a maximum score on their fitness test, but women only have to pull their weight up eight times to earn maximum points.

Jeannette Haynie, a female Marine reservist, wrote in July that she could not do three pullups but argued the Corps should stick to the tough rule despite mixed results in initial tests.

“Stick to the standard, keep the expectations high. Force us all, male and female, to hoist ourselves up to that bar,” Haynie wrote on a blog at the US Naval Institute.

In November, three women graduated for the first time from a grueling Marine Corps infantry training course and officials said no rules were relaxed for the female troops.

Women also have been invited to enroll in infantry officer training, but no woman has successfully completed the course so far.

Despite the latest decision by the commandant, pullups are not exactly going away for female “leather necks.”

The Corps has told its members that “all Marines are strongly encouraged to continue training under the assumption that pullups will remain a standard measure of physical fitness,” according to a message sent out to troops in November.