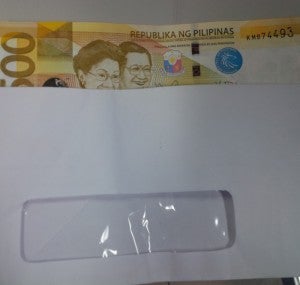 Makati, touted as the country’s thoroughly modern city, remains in the dark ages as far as paying employee salaries goes. Other local government units in Metro Manila have long adopted the automated teller machine system, a stark contrast to Makati City, where wages are still disbursed in archaic pay envelopes.

Makati, touted as the country’s thoroughly modern city, remains in the dark ages as far as paying employee salaries goes.

A telephone inquiry revealed that 16 of the capital’s 17 LGUs have been using the digitized payroll system since 2003.

In contrast, Makati, the country’s financial hub, has not yet updated its payroll system for about 9,000 employees, according to a 2012 annual audit report by the Commission on Audit (COA).

The COA noted that drawbacks to Makati’s payroll system include the high risk of loss or misapplication, loss of working hours for employees, long queues at the teller’s booths, and the tedious manual distribution of cash to 4,024 regular and 4,794 casual employees every payday.

Makati has the third-largest workforce with 7,411 regular and casual workers, according to a separate annual financial report on LGUs by the COA in 2012. Quezon City has the biggest number with 13,477 employees, followed by Manila with 10,749.

Makati, also considered one of the richest cities in the country, has the second-highest income next to Quezon City. From 2007 to 2009, the city’s average income was P8.51 billion, as shown by a National Statistical Coordination Board (NSCB) data released in 2012.

The NSCB said Makati generated the largest revenue in taxes during the same years with an average of P7.08 billion.

Makati spokesman Joey Salgado earlier said that the city government had been working on the ATM system since the 1990s, but was being stalled by changes in the personnel department.

Last year, the Aquino administration began implementing the National Payroll System (NPS), which enabled employees of the national government to receive their salaries straight from the Treasury through their bank accounts.

Of about 1 million employees of the national government, DepEd’s workforce accounts for the biggest chunk with about 579,000, followed by the PNP with 146,000 people and 125,000 in the AFP.

Budget Secretary Florencio Abad said the NPS will increase transparency and accountability in the bureaucracy, adding that it will be a valuable instrument in eliminating ghost employees and preventing other payroll-related irregularities.

The NPS will also ensure the timely remittance of withholding taxes to the Bureau of Internal revenue, and contributions to the Government Service Insurance System, Pag-Ibig Fund and PhilHealth.

The NPS is a component of the Government Human Resource Information System, which is tasked to harmonize and unify all personnel management operations in the bureaucracy, from recruitment all the way to retirement. It is expected to be completed in the second quarter this year.

Read Next
Car bomb kills 5 in Hezbollah Beirut bastion
EDITORS' PICK
DOH warns vs improper use of antigen test kits
Experience Terreno South’s refreshing take on thriving lifestyles
No to ‘negativity’: Marcos Jr. to only do ‘unbiased’ interviews
Start the year right with sustainable oral hygiene with SPLAT’s eco-friendly natural toothpastes
BBC StoryWorks and TECNO make short film about inclusive mobile camera innovations bringing people together
DOH: More beds needed than oxygen, ventilators
MOST READ
No to ‘negativity’: Marcos Jr. to only do ‘unbiased’ interviews
‘Not corrupt’: Lacson says he admires Noynoy Aquino of all PH presidents
Comelec: No reason to cancel BBM’s COC
If she weren’t running for President, Robredo says she would vote for Pacquiao
Don't miss out on the latest news and information.