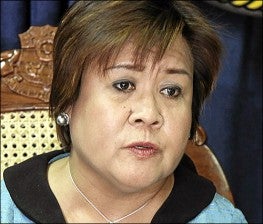 In a one page letter, Assistant State Prosecutor Romeo Senson said De Lima would be the best person to be the next Ombudsman.

He also noted that De Lima did a good job as head of the Commission on Human Rights.

As then CHR chief, De Lima had grilled Senson over the arrest of the 43 health workers who were accused as members of the New People’s Army.

Senson had recommended the filing of a case against the 43 for violation of Presidential Decree 1866, as amended by Republic Act (RA) 8294 and RA 9516, which imposes penalties for illegal possession of grenades and other explosives.

He said that the health workers also violated the Commission on Elections Resolution 8714 in relation to Article 261 (q) of the Election Code, which bans firearms during the election period.

The DoJ later sought the withdrawal of the cases that led to the release of the health workers last December.

Senson said that although De Lima would be a great loss to the DoJ if she would be appointed Ombudsman, it would, however, be in the public’s interest if she would fill up the post.

Gutierrez resigned from office last week amid a looming impeachment trial over allegations of inaction on graft cases, which included those filed against former president Gloria Macapagal Arroyo.

The Judicial and Bar Council (JBC) has opened the nomination for the Ombudsman post and set the deadline on May 16, a week before the JBC’s deliberation.