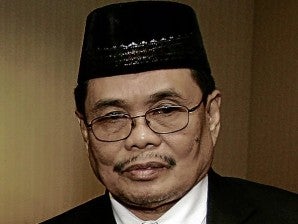 MANILA, Philippines—Moro Islamic Liberation Front chief negotiator Mohagher Iqbal set a hopeful tone Tuesday for the final document that would make up a comprehensive peace agreement with the government as both panels prepared for the next round of talks in Kuala Lumpur in the next few days.

Iqbal said an honest discussion between the two parties at the 43rd round of talks would allow for the completion of the normalization annex—considered a sensitive matter because it includes the laying down of arms by the Moro rebels—before April, when a draft Bangsamoro Basic Law which contains the final peace agreement should be submitted to Congress for approval.

Iqbal acknowledged that the normalization annex is a challenging document to thresh out, particularly because it includes many facets that would “normalize” the situation in Central Mindanao after many years of fighting.

The normalization annex includes the decommissioning of firearms, the redeployment of military troops to areas outside the Bangsamoro, the creation of a Bangsamoro police, the disbandment of private armies, and transitional justice, among others.

“These are very difficult and sensitive issues. But what’s important is an honest negotiation between the two parties. We should try to address each other’s concerns and settle the issues,” Iqbal told the Inquirer in a telephone interview.

Iqbal, however, said the text for the normalization annex could be completed in the 43rd round of talks, but not its terms of reference.

A source privy to the peace talks told the Inquirer that dealing with the private armies and the kidnap-for-ransom (KFR) groups within the jurisdiction of the future Bangsamoro, which will replace the Autonomous Region in Muslim Mindanao or ARMM, would be a major challenge in the implementation of the normalization annex.

On the other hand, the government is “pressured politically because it (Aquino administration) wants to exit in good graces,” the source added.

“They will decommission firearms completely provided there is a level playing field,” the source said, referring to a situation where there would no longer be communist insurgents, Abu Sayyaf terrorists, and private armies of politicians.