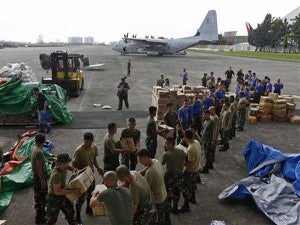 MANILA, Philippines—Fresh shipments of relief supplies are on their way to some of the places hit hardest by Supertyphoon Yolanda (Haiyan) as the UN refugee agency focuses on the most vulnerable sectors going into the second month since the emergency.

The Office of the UN High Commissioner on Refugees  in the Philippines is expecting 38 40-foot containers filled with shelter materials, clothing and chain saws to arrive at the logistics hub in Cebu between January 5 and 14 for distribution to the worst-affected areas, according to its chief official in Manila.

Bernard Kerblat, the UNHCR representative in the Philippines, said the second phase of disaster response will begin this month with the distribution of the next wave of relief supplies by sea following rapid distribution of aid by air during the early part of the emergency.

“The initial assistance was deployed on emergency basis by air. Now we are entering into phase 2… by sea because we want to use our spare resources in the most efficient manner. And it’s cheaper to bring huge quantities by sea,” Kerblat said in a telephone interview.

He said the shipments will carry some 30,000 pieces of plastic sheeting and as many blankets, some 1,500 mattresses and bed sheets from renowned Swedish home furnishing company Ikea and clothing for some 800,000 people from Japanese clothing company Uniqlo.

One container will arrive with some 560 chain saws to be distributed around communities for the clearing of felled coconut trees. The trunks will be processed into lumber for use in rebuilding homes of affected families, Kerblat said.

“We will not be able to serve the entire population and we will concentrate on the most vulnerable ones,” Kerblat told the Inquirer. “It’s a small initiative. It’s a drop of water. But all the drops of water pulled together make a river.”

The new wave of relief supplies are expected to arrive just as UNHCR has completed serving more than 300,000 of the hardest-hit across Eastern Visayas, a hundred percent of its initial target for distribution of emergency aid including shelter materials, solar lanterns and cooking utensils, among others.

Kerblat said the additional supplies will be distributed on a “needs basis” and will give priority to the most vulnerable, including persons with disabilities, the elderly, women and children, indigenous people and another sector who should be given more attention: widowed men grappling with guilt over the loss of their wives and children.

He said “very few people” are noticing the plight of these widowed men who are “overwhelmed” survivors of the deadly typhoon.

“Because a lot of these men, having lost their wives, having lost their children, all of a sudden find themselves by themselves, guilty of being alive, and also being a provider to one or two children who may have escaped the destruction. And they are overwhelmed with guilt, overwhelmed with the desire to go back to their traditional activities like fishing and so on, to rebuild the house,” said Kerblat.

He said the UN and its partner agencies and organizations were looking for ways to address the situation, particularly through providing them livelihood “as early as possible.”

He said the shipment of chain saws, donated by European outdoor power products firm Husqvarna, will be distributed to some of these men to help them jumpstart livelihood again.

Typhoon Yolanda left more than 6,000 dead and affected an estimated 14 million people, of whom four million lost their homes.

Read Next
2013 was a banner year for anti-narcotics drive, says drug agency
EDITORS' PICK
DOH says COVID-19 cases plateauing, but public shouldn’t be ‘complacent’
Look Through: The fate of impounded stray dogs
23,000 cops to be deployed nationwide for school reopening
What to watch out for when selecting a video surveillance solution
House energy committee chair Arroyo bats for cheap electricity
Unleash the photographer in you this World Photography Day with vivo smartphones
MOST READ
Solons file resolutions seeking probe on ABS-CBN, TV5 merger
Korina Sanchez reunites with former ABS-CBN co-anchors Julius Babao, Cheryl Cosim
Light therapy could be the answer to your sleep problems
Sharon Cuneta asks for prayers for friend in ICU who suffered silent stroke
Don't miss out on the latest news and information.