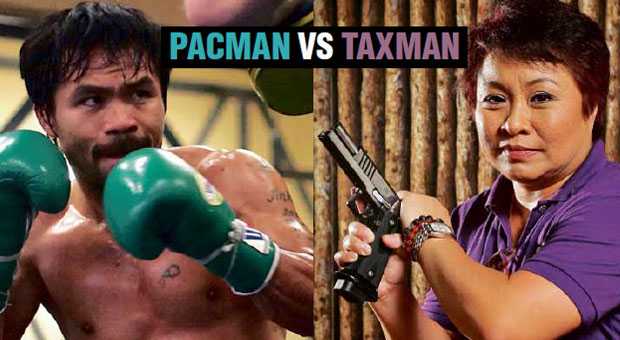 WHO WILL WIN? Boxing superstar Manny Pacquiao accuses Revenue Commissioner Kim Henares of harassing him. But Henares claims Pacquiao did not declare his US income and underdeclared his Philippines income in 2008-2009. RICHARD BALONGLONG/INQUIRER NORTHERN LUZON; ANDREW TADALAN/INQUIRER FILE PHOTO

Given their verbal tit for tat a few weeks ago, getting boxing champion Manny Pacquiao and Revenue Commisioner Kim Henares together in a place teeming with firearms might not have been the best of ideas.

But President Aquino might have been thinking counterintuitively when he invited Pacquiao on Dec. 21 to the Presidential Security Group compound’s firing range inside the Malacañang complex in Manila to take part in a practical shooting competition.

Not only was the eight-division champion invited to the event, he was also paired by Aquino with fellow shooting enthusiast Henares for the competition, a regular Saturday activity for the President.

“So we ended up as partners, shooting for the same team,” said the BIR chief in a telephone interview. “It was the President’s idea, I think.”

“Friendly engagement simply proves that the President does not harbor any ill will against Representative Pacquiao despite the fact that the BIR (Bureau of Internal Revenue) is making him accountable for reported deficiencies in his income tax payments.

“Joining a sports activity where the President is present does not stop or deter the BIR from pursuing its case against Representative Pacquiao,” Coloma said in a statement.

Pacquiao—who is also a congressman representing Sarangani province—has been slapped with a P2.2-billion bill by the BIR, which alleges that he failed to pay taxes for his income from boxing in recent years. For this, tax authorities have ordered local banks to freeze his accounts.

This prompted Pacquiao to call a press conference, saying that he was being harassed by local authorities for taxes that had supposedly been settled in the United States. [The US Internal Revenue Service itself has issued a levy on Pacquiao’s US bank accounts to recoup more than $18 million in alleged tax liabilities from 2006 to 2010.]

The ensuing media war, in which both sides made increasingly acrimonious and inflammatory statements, prompted the Court of Tax Appeals (CTA) early last month to impose a gag order on both camps pending the resolution of the tax cases.

The P2.2 billion covers allegedly unpaid taxes plus penalties for incomes—winnings from his fights, earnings from pay-per-view cable services that aired the fights and earnings from endorsements—in 2008 and 2009.

Penalties accounted for about half of the tax liability assessment.

Unpaid tax liabilities may be slapped a maximum 50-percent surcharge and an annual interest of 20 percent, according to the Tax Code.

Following his alleged failure to respond to the BIR’s tax assessment, the BIR in July issued a warrant of distraint and levy on the two bank accounts of Pacquiao worth P1.1 million.

The move was aimed at getting hold of the money as partial payment for his alleged tax liabilities.

Pacquiao then immediately filed a motion in the CTA to contest the tax assessment and to prevent the BIR from getting hold of his money.

The Pacquiao camp and the BIR later agreed to pursue an out-of-court negotiation over the P2.2-billion tax case, prompting the CTA to issue a gag order.

The gag order was honored during the shooting competition in Malacañang, with neither party bringing up the tax issue.

“We didn’t discuss his case,” Henares said. “We didn’t talk shop, just like I never talk shop with the President during these Saturday sessions at the firing range, unless I’m asked to.”

Instead, both devoted their efforts to producing the best scores for their team on the pistol range.

Henares described the boxer as “proficient” with a firearm, although she pointed out that there were trade-offs in his shooting performance.

“He’s accurate in hitting his targets … but when he’s accurate, his speed suffers,” she said, describing a common condition in practical shooting. “And when he’s fast, his accuracy suffers.”

Pacquiao—who was earlier reported to have over 100 firearms registered in his name, many of which are carried by his security personnel—showed up at the firing range without his usual large entourage, but only with two staffers in tow.

Their results at the end of the day were not bad. “We won one set and we lost another,” Henares said.

Almost every year, the boxer-lawmaker holds the Manny Pacquiao Shooting Cup, the latest taking place the first week of December where he gave out 30 9mm and .40-cal. Glock pistols as prizes.

A range officer who asked not to be named said Pacquiao, as a shooter, was OK.

“As a shooter, I would say Pacman is OK. He can shoot,” the source said.

In Mindanao, Pacquiao has the most advanced shooting range in his beach resort in Tinoto, Maasim town, in Sarangani.

“It’s a 15-stage shooting range—the first of its kind in Mindanao. It’s still being developed. We just held a level 3 shooting competition there last Dec. 5 to 7,” the source added.

Henares refused to speculate on why Aquino paired her with Pacquiao for the shootfest, but she described the event as “enjoyable.”

She also declined to speculate on the results had the President decided to pit her against the boxing champion on opposing shooting teams.

“I don’t think the President is that theatrical,” said the BIR commissioner, who has been receiving lessons from the President himself.

Henares described the practical shooting competition as a friendly game.

“It is separate and distinct from any legal obligation of Mr. Pacquiao under the law. It does not detract or add to his obligation. It will not in any way affect how he will be treated, which is the same way as others will be treated. He was a guest and I was also a guest so we treated each other accordingly—with civility,” she said in a text message on Tuesday.—With a report from Christian Esguerra

Pacman no match for taxman