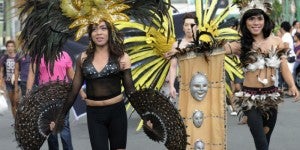 MANILA, Philippines — The Valenzuela City government has tied up with a local group of lesbians, gays, bisexuals and transgenders (LGBT) for the prevention of diseases such as the human immunodeficiency virus (HIV) and acquired immune deficiency syndrome (AIDS).

In a statement, the city government said it has tapped the Dignified LGBT Association (DLGBTA), a Valenzuela-based LGBT group, as “peer educators” tasked with disseminating information about HIV and AIDS as well as the programs and services offered by the city government on disease prevention.

George Nicolas, DLGBTA’s public relations officer, said that the peer educators also belonging to the LGBT community, could also foster engagement and organize other gay people in the city.

“We have to organize gay people. Although there are existing gay groups in different [villages] today, we still need a venue where all these groups can interact,” he said.

He expressed hope that the program would lead to steady cooperation between the city government and LGBT groups to promote a common cause.

“We need to show other cities that the local government and gay people in Valenzuela City are united in the goal to end the spread of HIV/AIDS,” Nicolas added.

The city government said it has been offering free HIV testing at the city’s Social Hygiene Clinic, which has been availed of by more than 100 people.

AIDS is a disease that develops from the human immuno-deficiency virus, which destroys the body’s defense systems against infection and may lead to death.