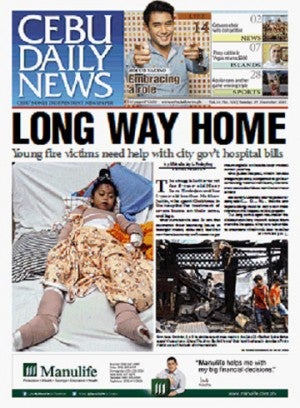 The struggle isn’t over yet for 6-year-old Mary Irene Simbajon and her 2-year-old brother Matthew Justin, who spent Christmas in the hospital for treatment of severe burns on their arms, and legs.

They survived the Dec. 14 fire that destroyed their boarding house in barangay Parian, Cebu City, but their now-homeless family can’t afford to pay mounting bills at the Cebu City Medical Center (CCMC).

The public hospital, which handles indigent patients, is expected to get busier treating victims with burns, this time from firecracker blasts for the New Year revelry.

“As long as the open wounds of the children are there, we can’t release them from the hospital. They are vulnerable to infections which will lead to other complications,” Alfornon said.

The children’s mother, 24-year-old Rowena, said she asked permission to have Matthew Justin discharged yesterday because she was worried about the running bill of over P8,000 which she’s unable to pay.

“I don’t have money. My contract in Profoods just ended recently and I don’t know where to get money to pay for their hospitalization,” said the former factory worker in Cebuano.

Rowena wanted to let her visiting mother bring the boy to their hometown in Bukidnon province but the doctor advised against it.

The two children need to take the antibiotic Ceftazidime three times a day and Cloxacillin” four times a day. Burn ointment also has to be applied regularly.

Bandages cover the kids’ arms and legs, aside from other parts of the body. Their faces bear scars of minor burns.

“We will only discharge them if the children are transferred to a hospital in Bukidnon since they are not yet fully recovered. This will take time in terms of medication,” Dr. Alfornon said.

The government hospital will continue treatment of the children while they are confined but sponsors are needed to ensure that all medical needs are met.

A city government charity fund has been tapped, but expenses already exceeded the prescribed limit.

He was able to bring the children out of the burning boarding house but they had difficulty going downstairs because the stairway was congested.

The fire started in a rented room across theirs on the second floor. Investigators suspect faulty wiring was the cause.

Rowena and her family have lived in Cebu City where she’s worked for more than five years. They would go to her hometown in Mindanao for special occasions.

The fire struck December 14, the day they were scheduled to leave for Bukidnon.

“Every year we go home to the province to celebrate Christmas and New Year’s Eve but because of what happened, we celebrated Christmas in the hospital, and now even New Year,” Rowena said.

She was out when the fire broke out.

“I went outside the house to buy water but when I came back, everyone was in a panic because there was a fire in the house,” she said.

“I wanted to get inside the house but my neighbors stopped me because the whole house was almost on fire,” she said.

Rowena was unable to save any of their belongings.

With two sick children and no lodging to return to in the city, she has been sleeping at the CCMC for the past two weeks.

Read Next
Reds may not like it, but gov’t to pursue peace
EDITORS' PICK
Bato Dela Rosa now having second thoughts about legalizing drug use
Average daily COVID-19 deaths in PH down from 38 to 12 — OCTA
House energy committee chair Arroyo bats for cheap electricity
The vivo X80 Series and vivo V25 Series is on everyone’s wishlist
vivo’s coming to town to grant wishes with more holiday promos
Senate, House bicam conference on proposed 2023 budget starts
MOST READ
LOOK: Vhong Navarro transferred to BJMP detention facility in Taguig
The Elephant Man in the Senate
Posh village as ‘shabu’ haven
LOOK: Zanjoe Marudo bonds with Ria Atayde, her family
Don't miss out on the latest news and information.