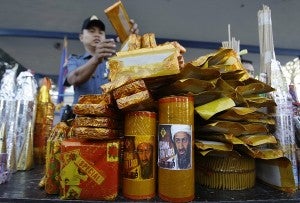 Wilson Meterio died 10 hours after a stockpile of firecrackers exploded in his home in Barangay (village) Bucandala 5 on December 23.

A police report on Friday said the victim succumbed to burns he sustained in the blast.

Superintendent Redrico Maranan, Imus police chief, said in a phone interview Friday that they too just recently learned about the victim’s death from his family.

He said Meterio, who was first taken to a hospital in Cavite, was later transferred to the Jose Reyes Memorial Hospital in Manila due to the gravity of his injuries, and died there.

Police reports showed that Meterio happened to be standing alone in their garage, where the firecrackers were kept. The stockpile, among them fountains, suddenly exploded, damaging the house’s front door, an awning, and causing glass windows at an adjacent dental clinic and a village hall to shatter.

No one else was injured in the incident.

Maranan said Meterio’s family used to sell fireworks every New Year and the stash was left over from last year.

“He must have moved it or done something that triggered the blast. We really could not know because no one saw what he did before the explosion,” Maranan said.

But the police said they would still press charges against Norma Garcia, Meterio’s distant relative and the owner of the house, for what Maranan said was an apparently improper way of storing the firecrackers.

“It was a residential area, for one,” he said. “If you are selling fireworks, you must have a warehouse where you could safely store them. In the event they failed to sell them all that year, they must have coordinated with the police to safely dispose of the firecrackers,” he added.