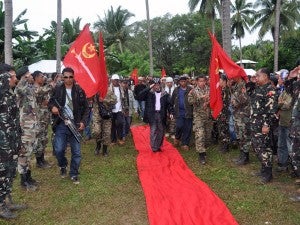 Chief Inspector Ariel Huesca, spokesperson of the Western Mindanao Regional Police Office, confirmed the transfer of the 287 detainees but refused to provide additional details for reasons of “national security.”

Senior Superintendent Rey Dante Soledad, in charge in securing the perimeter of the San Ramon Penal Colony in the village of Talisayan on the outskirts of Zamboanga City, said all the MNLF detainees had been “safely transported.”

“Now we can breathe easy and celebrate the New Year without fear or worries of a possible attack,” Pareja said.

Pareja said the detainees were transferred on foot to a nearby wharf where a Philippine Navy ship was waiting.

Early this month, security at the penal colony was heightened after authorities intercepted notes from visiting relatives indicating there was a plan to rescue the detainees, Soledad said.

The detainees were expected to arrive in Manila before the year ends.

Ricardo Cabaron, the city’s prosecutor, said documents concerning the 287 detainees were sent to the Department of Justice last month, and the cases against them have been transferred to a court in Taguig.

All the 287 detainees were arrested in connection with the 23-day Zamboanga siege that began on September 9.

Out of Zamboanga siege, Soliman makes deal with God