Read-along for kids, even in quake-hit Bohol | Inquirer News

Read-along for kids, even in quake-hit Bohol 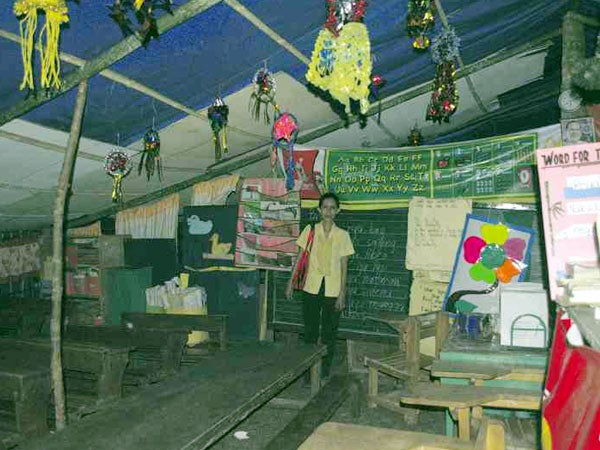 GOOD AS CLASSROOM Teacher Maria Lea Anosa inspects the makeshift tent made of tarpaulin, wood and sticks that serves as a temporary classroom in quake-hit Sagbayan town in Bohol. Photo by BELINDA GOOD

Amid the rubble left behind by a 7.2-magnitude earthquake in Sagbayan, Bohol, Christmas lanterns hang in makeshift classrooms in Katipunan Elementary School—little things that speak of the Yuletide season.

The October quake destroyed the school’s facilities and left its 136 students crowding in hot classrooms in tent houses, separated only by an improvised thin wall.

“It was really hard teaching and all the more hard for the students to listen,” said Samuel Anosa, the head school teacher.  “It was hot and uncomfortable and we could not hear each other much. We lost school supplies and books.”

Since the quake, electricity supply in the area has been unstable.

Anosa said that right after the quake, very few students liked to go back to school.

“Everybody here was a victim, each one attending to the rebuilding of their houses,” said Anosa, who still has not fixed his home. His main concern is to rebuild the school.

“Holding classes immediately would somehow divert the students’ attention from problems at home,” he said.

In school, the students learned what happened to each other and “together, they hope [for the best],” Anosa said.

The death of four of his students, one of them a Grade 3 first honor, has broken Anosa’s heart.

The students were swimming in the waterfalls before the quake happened. A landslide buried them alive and their bodies were never found again.

Everything happened too fast and the students could not believe their school—and playmates—were gone.

“It’s the first time we have nothing on our table on Christmas Eve,” Anosa said later in a text message to the Inquirer. “We just slept and prayed the rosary. We are grateful that we have been spared and are safe and alive.”

Christmas came early for the students when the Inquirer Read-Along team, in partnership with a group of volunteer-readers called Basadours, went to Bohol on December 13 to bring Christmas gifts.

The team held art activities as well as singing and a little dancing in the morning. In the afternoon, they conducted a storytelling session in the nearest chapel.

Boxes of books from Vibal Publishing, as well as toys and school supplies, were handed out. The idea was to make this a  happy Christmas for the students.

One by one they gave

A simple call had led to the outpouring of gifts from willing givers.

One by one, Inquirer employees and friends donated toys, coloring materials and money for the children. One group initiated the move and others followed—a testament that everybody was a giver and the Boholanos were a good soil to sow in.

“What the Inquirer brought us is a very big help,” a teary-eyed Anosa said. “I’m really grateful that you came here although this is a very far place. We hope to have the classrooms rebuilt soon.”

During the Read-along session, the Grade 6 pupils  rendered a song for their new friends from Manila. To the tune of Imelda Papin’s “Isang Linggong Pag-ibig,” they narrated how the earthquake affected them and their school:

The lyrics written by teachers Anosa and Hazel Mediano almost brought the volunteers and parents to tears.

Eva Marie Gamboa, a member of the Basadours, said sharing the joy of reading motivated her to volunteer for the read-along session.

“I grew up in a family where my father would read me stories at night,” she said. “There was immense joy in learning new things. When I read to students, I see they want to hear more. They are really happy.”

Cris Evert Lato, Basadours vice chair, said almost all of their members often go to libraries and that she herself has often seen old people going to libraries just to read.

The government’s response has been to create more libraries, she said, adding: “It’s a sad state since not all have access to the libraries.”

With read-along and Basadours’ activities, there’s not only food for the body but also food for the mind, Lato said.

Basadours was established in January last year and now has 20 core members. They are guided by child-protection policies, which include prohibition against  taking pictures of children without the consent of parents or teachers and taking photos of children in a degrading manner, like children without underwear.

There have also been cases where people would post sensitive photos of children on Facebook for the sake of posting.

“The children’s dignity is what’s left of them after the disaster. Let us not take that away from them,” Lato said.

“Working with kids is fun and hard at the same time … . After a read-along (session), the children will hug you so tight. It really feels so good! I need not be a celebrity because in the mountains and barangay, I feel so loved,” Lato said.

In Bohol, the volunteers aimed to bring love. In the end, they were the ones who received love.

(To those willing to extend help, you may reach the author at [email protected])