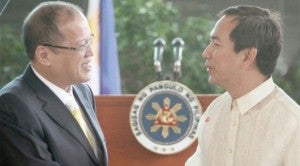 MANILA, Philippines—Critics see the brouhaha over Energy Secretary Carlos Jericho Petilla’s offer to resign as a “self-inflicted wound,” as he never really promised to reenergize all typhoon-ravaged communities in the Visayas by Christmas Eve.

All Petilla promised was to reconnect the towns to the power grid, his critics and even his defenders said on Thursday.

As for the homes, there were few to reenergize because Supertyphoon “Yolanda” (international name: Haiyan) flattened entire communities in the Visayas, they said.

As expected, President Benigno Aquino III rejected Petilla’s resignation on Thursday, but the militant women’s group Gabriela said the President should really keep him so he could be held accountable for the P4.15 per kilowatt-hour power rate increase that Manila Electric Co. (Meralco) imposed on its 5.3 million customers in Metro Manila and surrounding provinces just before Christmas.

According to Malacañang, Mr. Aquino commended Petilla for restoring electricity to the communities in the Visayas ravaged by Yolanda last month.

Petilla met with the President behind closed doors in Malacañang and offered to resign for failing to meet his self-imposed Christmas Eve deadline to reenergize all 320 towns flattened by the typhoon on Nov. 8.

Presidential spokesperson Edwin Lacierda said in a statement that the President rejected Petilla’s resignation because it had been originally estimated that it would take three to six months to restore power to the communities because of the great damage caused by Yolanda.

“The Luzon-Visayas connection was down, the major geothermal plant in Leyte was also down and generation, transmission and distribution lines were down,” Lacierda said. “In the face of these challenges, the accomplishment of Secretary Petilla speaks for itself.”

Lacierda said Petilla managed to restore power to the communities in roughly 40 days and “within that period he was able to energize 317 of the 320 affected towns, leaving 0.93 percent still to be [reenergized].”

“By any measure, this is an excellent performance. The President noted that foreign observers who had seen the work being done in the Visayas, and in comparison to disasters of lesser magnitude in other countries, pointed out that the repair and rehabilitation of energy infrastructure was done faster,” Lacierda said.

“For all these reasons, the President, in rejecting Secretary Petilla’s offer to resign, reiterated that he had no intention of losing the services of an honorable public servant,” he said.

At an earlier news conference in the Palace, there were no indications from administration officials that Mr. Aquino was letting go of Petilla, a former governor of Leyte province whom he picked in October 2012 to replace Rene Almendras as head of the Department of Energy (DOE). Almendras has since been moved to the Office of the President as Cabinet secretary.

Communications Secretary Herminio Coloma told reporters that he did not see any immediate change in the DOE, as Petilla traveled with the President on Sunday and that the transcript of their meeting contained nothing derogatory to the energy chief as far as the restoration of electricity to the calamity areas was concerned.

Coloma also made it clear that Petilla had been helpful to the President and to the Cabinet.

Before Malacañang announced the rejection of Petilla’s resignation, militant groups said offering to resign for failing to restore power to all 320 towns ravaged by Yolanda did not absolve the energy secretary from responsibility for the record-high increase in power rates that Meralco began to implement just before Christmas.

Gabriela Rep. Emmi de Jesus said Petilla should be called to account for the P4.15/kWh power rate increase that Meralco had planned to enforce in three phases but was temporarily stopped by the Supreme Court on Monday.

For failing to stop that rate increase, De Jesus said, Petilla should be investigated by Congress.

The labor coalition Nagkaisa also believed Petilla was equally responsible for failing to stop Meralco from increasing its rates.

But Petilla’s offer to resign underscored what his deputies, who play key roles in the supervision of the energy market, had not done, Nagkaisa said.

Being on the front line, Nagkaisa said, Ducut and Ocampo are supposed to be the first to detect market failure and protect consumers’ welfare, but they did nothing as Meralco imposed the first phase of the rate increase this month.

“They therefore should go,” Nagkaisa said in a statement.

Ducut and Ocampo should also be investigated for possible economic sabotage, the group added.

Nagkaisa said Ducut and Ocampo had known about the scheduled maintenance shutdown of the Malampaya gas pipeline but did nothing to prevent economic repercussions.

ACT Teachers Rep. Antonio Tinio, however, believed Petilla should stay on the job and set a new date to reenergize all of the calamity-stricken communities.

Petilla should also keep going after those who had allegedly conspired to raise electricity prices, Tinio said.

“He must pursue to the end the DOE investigation into the price manipulation among private power producers and collusion with Meralco that led to the unprecedented power rate hike. There should be no whitewashing or backtracking there,” he said.

Petilla must also proceed with his plan to reform the rules of the Wholesale Electricity Spot Market to curb the excesses of the private power producers, he added.

Pete Ilagan, president of the National Association of Electricity Consumers for Reforms Inc., one of the consumer associations fighting Meralco’s power rate increase in the Supreme Court, said Petilla should not resign for failing to deliver on his promise.

Ilagan said Petilla was “a man of his word.” He said he hoped President Aquino would not accept Petilla’s resignation.

Sen. Grace Poe said President Aquino should keep Petilla, since the energy chief managed to restore power to most towns ravaged by Yolanda.

Besides, Poe said, “[we] need continuity and organization. If Petilla is removed now, we can expect further delays in the rehabilitation process.”

Sen. Vicente Sotto III praised Petilla for keeping his promise to resign if he failed to meet his Christmas Eve deadline.

But Sen. Antonio Trillanes IV said he was baffled that some officials would offer to resign instead of submitting “irrevocable resignations.”

“I don’t really get all these resignation offers. If you truly believe you failed to accomplish your mission, then you resign irrevocably. No drama!” Trillanes said.

‘We are not bionic’

Maria Rosario Avestruz, general manager of the Leyte II Electric Cooperative (Leyeco), defended Petilla, who she said promised only to reconnect the towns to the power grid.

Reenergizing homes is not Petilla’s job, she said, as that is the responsibility of the power cooperatives.

That is not an easy job because of the extent of the damage from the typhoon, she said.

Avestruz said Leyeco itself had restored power service to only two percent of its 35,000 customers in Tacloban City because of the many downed electric posts and damaged wiring in buildings and homes.

“We are not bionic [that we can] immediately restore power to the houses,” Avestruz said. “But we are doing everything we can to energize our coverage areas.” With reports from Christine O. Avendaño and TJ A. Burgonio in Manila, and Joey Gabieta, Inquirer Visayas