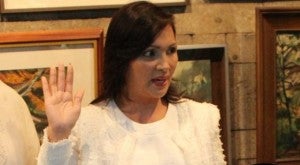 MANILA, Philippines — Following the higher taxes on “sin” products such as alcohol and cigarettes, could those bottles of cola be next in line?

Higher taxes should be imposed on soft drinks and the like, especially now that the revenue to be collected would go to such an important project as the rehabilitation of calamity-stricken areas, Nueva Ecija Rep. Estrellita Suansing said.

Suansing has filed a bill that would impose a 10 percent ad valorem tax on soft drinks and carbonated beverages sold in bottles and other tight containers.

She said the benefits of the measure would be two-fold: it would provide the government with a source of revenue for the massive rebuilding of the provinces leveled by recent the recent massive earthquake in the Visayas and the series of destructive typhoons, the latest being Yolanda; and it could help lower the risk of people contracting certain illnesses.

Suansing’s bill specifies that the funds to be collected from the imposition of the ad valorem tax would go to the Rehabilitation Fund for calamity victims, and would be used for such programs as livelihood development, mass housing, road construction, and other infrastructure projects.

“Filipinos are resilient and can rise above all these calamities. However, necessary funds and revenues for the rehabilitation are needed,” she said in her explanatory note.

She also touted the health benefits that would come with higher soft drink taxes. An increase in the price of soft drinks and carbonated beverages could help wean consumers from buying these products.

“Aside from the rehabilitation fund, another purpose of the bill is to curb the consumption of soft drinks and carbonated drinks. There have been studies which have shown that consumption of such types of goods increase the risk of developing health problems such as blood sugar disorders, obesity, diabetes and other related diseases like bone fractures, hyperacidity, tooth decay, and heart problems,” she said.

According to her, the Philippines would not be the first to impose more taxes for non-alcoholic drinks.

“Other countries like the USA, France, Netherlands and Finland have realized the need to impose taxes on soft drinks and carbonated drinks,” she added.

Flavored and colored syrups that are needed to manufacture soft drinks are not subjected to excise tax, and only to the 12 percent VAT and customs duties if these are imported.