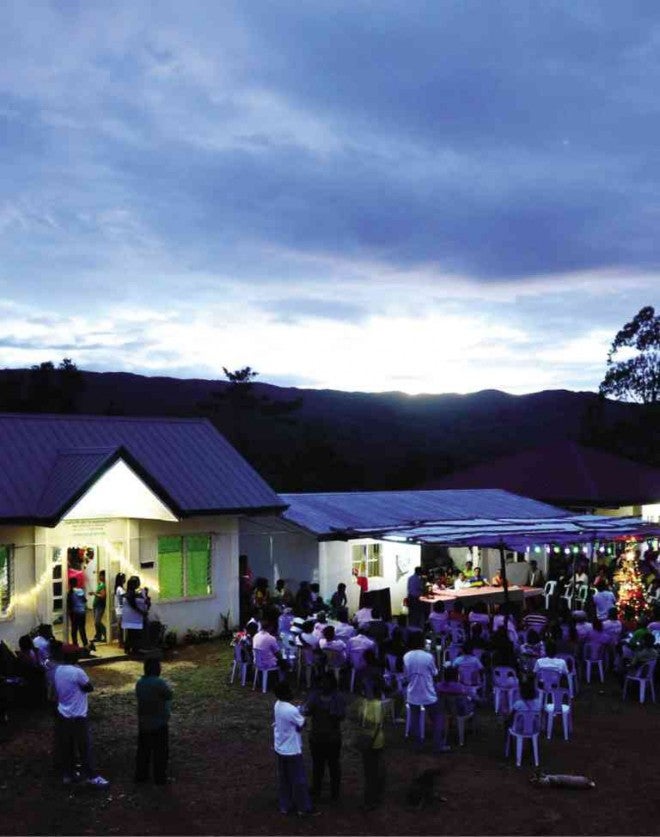 It was a surprisingly bright Monday evening for tribal chief Rodolfo Mallari. The community square and the three surrounding one-room buildings at Sitio Mapita in Aguilar town in Pangasinan province were aglow with incandescent bulbs as dusk set.

It had been a long wait for Mallari and 800 residents of Mapita, a thriving mountain village of indigenous peoples (IP) consisting of Kankanaey, Ibaloi and Bago families, who had no electricity for decades. The village is located 12 kilometers from the national highway.

It is the 21st century and Mapita villagers insist they have always celebrated Christmas.

But the village did not enjoy the conventional Christmas atmosphere because there were no Christmas lanterns to brighten up the dark evenings, said Jun Pastor, 46, a farmer who has lived in the village since 1978.

“We used gas lamps and during our fiesta celebration every April, there was a generator set that lighted up the plaza,” he said.

“For a long, long time, they have been waiting and they have been dreaming of this kind of service,” said Pangasinan Representative Leopoldo Bataoil, who was guest of honor at the lighting ceremony on Monday.

Since 2010, Bataoil said he had urged the National Electrification Administration (NEA) to include the village in the priority areas of its sitio electrification program.

“But the NEA had a hard time looking for funds because the village was far and there were only a few potential consumers in the area,” he said.

The sitio grew from four original indigenous Filipino families who settled in the area in 1963.

But in September this year, the Central Pangasinan Electric Cooperative (Cenpelco) began erecting electrical poles and installing cables until these reached the village early this month.

On Monday, the lines were energized. Rodrigo Corpuz, Cenpelco general manager, said P12.5 million was spent for the project. “For many years, we have included this project in our work plans for funding by the national government. But it is only now that it finally got funded,” he said.

Bataoil said electricity had lifted the morale of residents. Power could also spur development. “I see the potential of this sitio because of the kind of people that we have here. They are very industrious and patient,” he said.

Villagers plant rice and salad vegetables all year round. A stream that cuts across the mountain has served as source of water for their crops. They fetch their drinking water from natural springs.

“They have been producing quality vegetables. Lately, the Gulf Bank and [fast-food chain] Jollibee have been buying tomatoes, green pepper and other vegetable products,” Bataoil said.

Villagers would also be able to access the media, he said, adding that these are valuable sources of information in improving their economic activities. “[Progress] will start from little things, which will eventually grow to become an industry,” he said.

Betty Ballesteros, head of Barangay Laoag, where Sitio Mapita is located, said electricity meant that school children would no longer have difficulty working on their homework. The sitio has a public elementary school with four teachers and a day care center for preschool children.

High school students travel to the lowland on Sunday afternoon and go home after their classes on Friday afternoon.

On Christmas eve, residents scheduled a party and planned to exchange gifts at a plaza now illuminated by incandescent bulbs.

From an elevated dirt road, Mallari repeatedly glanced at the colorful star-shaped Christmas lights that adorned the buildings’ façade and the Christmas tree nearby.

“This is the greatest Christmas gift that our village has ever received,” said Mallari, in a message he delivered when power was formally switched on.