newsinfo / Regions
Regions
AMID THE RUINS 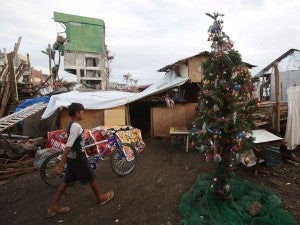 TACLOBAN, Philippines – Survivors of Supertyphoon “Yolanda” (international name: Haiyan), one of the strongest typhoons ever to hit the Philippines,  on Tuesday prepared to celebrate Christmas in the ruins of their communities.

Hogs were being roasted, Christmas trees adorned streets, last-minute shoppers filled downtown and heavily damaged churches overflowed with parishioners on the eve of the country’s most joyous holiday.

“Nothing can stop us from welcoming Christmas even though we have lost our home,” 63-year-old butcher’s wife Ellen Miano told AFP from a tiny shanty rising from a field of debris in the central city of Tacloban.

Yolanda’s  ferocious 315 kilometers (195 miles) an hour winds flattened the gritty neighbourhood on Tacloban’s coast, called Magallanes, then swept up everything else with giant waves in a day of terror on November 8.

Tacloban and nearby districts accounted for more than 5,000 of the 6,000-plus confirmed deaths, with nearly 2,000 others missing, making it the country’s deadliest storm and one of its worst natural disasters.

Miano, who lives with her husband and four young nephews and nieces in the 2×3-meter (6×10-feet) hovel put together from salvaged wood and sheet metal, said the family would eat a traditional Christmas dinner at midnight, with fried noodles and sliced bread given to them by a relief agency.

Their 20-year-old neighbour Ronfrey Magdua built a giant, 4-meter-tall star-shaped lantern using salvaged wood and wrapped in the Philippine flag’s motif of red, white and blue, and put it up in the yard of a family that perished in the disaster.

“I made this in honor of the dead,” the jobless young man told AFP, saying he spent about 2,000 pesos (45 dollars) of his own savings on the project.

“I made many of my neighbours happy. Some of them told me it relieves some of their stress,” said Magdua, who lost a dozen distant relatives to the storm surge.

Some of the survivors have received small amounts of cash from the United Nations, the Philippine government and other aid organizations taking part in a scheme designed to revive the economy of devastated communities.

The UN’s World Food Programhas given out 1,300 pesos to some 18,000 of the poorest families in Tacloban and nearby areas in the runup to Christmas Day to spend on rebuilding their lives, said spokeswoman Amor Almagro.

The UN agency plans to provide $6 million to 100,000 families in the next few weeks, with other agencies also financing government schemes where people who lost their jobs are paid the minimum daily wage to clear debris from roads, Almagro told AFP.

The storm made 4.4 million homeless and caused $12.9 billion in damage, according to the government, which estimates it will take the affected central region, an area the size of Portugal, four years to recover.

But damaged churches in Tacloban and nearby towns opened their doors early Tuesday for the last of the pre-dawn masses held in the 10 days until Christmas Eve that mark the country’s holiday season.

“There will always be something beautiful that will come after what happened to us,” Bernardo Pantin, the parish priest of Palo town adjacent to Tacloban, told his parishioners in a homily.

About 100 people attended mass at a makeshift church made from coconut lumber and blue tarpaulin, after the old one was totally blown down by the winds.

“It (the typhoon) changed our lives, but we know that good things will follow. But of course it will take time,” Pantin told AFP.

At the Palo parish of San Joaquin, six-year-old Clifford Cobacha and his uncle Rico Cobacha, 27, attended pre-dawn mass and later lit candles in the church courtyard in front of a cluster of three small wooden crosses that marked the grave of his mother and two brothers.

More than 300 other bodies are buried in the church courtyard, their graves also marked with small wooden crosses

“It will be difficult to celebrate Christmas after we lost 15 relatives,” the elder Cobacha told AFP. Eight of them lay amongst the mass graves, with seven others, including the boy’s father, still missing.