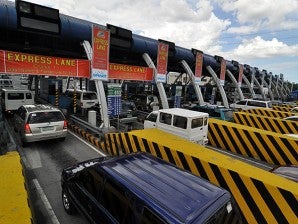 The expressway is 4.5 kilometers from the Tarlac City exit of the Subic-Clark-Tarlac Expresway (SCTEx) and will entail an additional toll of P58 for the entire stretch.

Mr. Aquino arrived past 10 a.m. at the San Pascual Operation Center here from his inaugural drive-through from Barangay Guiteb in Ramos town where the Paniqui exit is located. It took him 17 minutes.

In his speech, Mr. Aquino said the TPLEx was an “aguinaldo” (Christmas gift) to the people of Tarlac and neighboring provinces. He said the expressway will boost tourism and industries in Northern Luzon.

“This is really a blessing for more or less 20,000 motorists who will be serviced [by TPLEx] every day,” the President said in Filipino.

“And with more efficient transportation here in Tarlac will come improvements in tourism, commerce and services in our city and nearby provinces. The result: the growth of the local economy that would open more doors of opportunity for our people,” he said.

Mr. Aquino said the Tarlac City-Gerona-Paniqui section of TPLEx was a “testament to the cooperation between the government and the private sector in delivering service to the people.”

The expressway was made possible by Private Infra Dev Corp., which involves San Miguel Corp. (SMC) and DMCI Holdings Inc.

The entire project is set to be completed by 2018, two years after Mr. Aquino steps down from office, but the President is optimistic the TPLEx will be finished sooner.

“If you fail to keep your promise to finish it by 2018 because it would be completed sooner, no one would feel bad,” he said, addressing Public Works Secretary Rogelio Singson, SMC president and chief operating officer Ramon Ang, and DMCI Holdings Inc. president Isidro Consunji.

Calling the expressway opening as a welcome development for Tarlac, Gov. Victor Yap said it will open doors for the interior towns that are now accessible.

With the vast lands in these towns, the province can now be a hub for manufacturing firms in need of factory space, he said.

The expressway provides exits in all the towns that it traverses, making the entry and exit of goods easier, he said. He said the province is prepared to provide incentives and build arterial roads for additional access.

Mayor Candido Guiam III of Victoria said the town plans to set up the Victoria Pilot City and provide land to investors willing to set up factories in the area.

Once completed, 88.85-kilometer TPLEx will stretch all the way to La Union province, reducing travel time to the northern provinces. It will traverse 17 towns, 2 cities and 4 provinces.