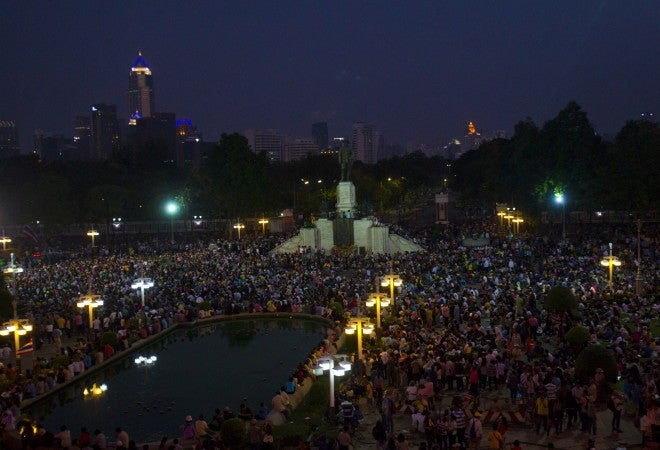 Thai anti-government protesters gather outside Lumpini park during a rally on Sunday, Dec. 22, 2013, in Bangkok, Thailand. Tens of thousands of protesters marched through Thailand’s capital on Sunday, paralyzing traffic and facing off with police outside the prime minister’s residence in their latest bid to force her from office. AP PHOTO/SAKCHAI LALIT

BANGKOK—Tens of thousands of Thai protesters rallied Sunday in their latest attempt to oust the prime minister, paralyzing central Bangkok and vowing to block parties from registering for hotly disputed polls.

The protest followed a declaration by the main opposition Democrat Party that it would boycott a snap election called by embattled Prime Minister Yingluck Shinawatra for Feb. 2.

Thailand has lurched deeper and deeper into crisis despite Yingluck’s attempt to dissipate the unrest by calling an election.

Demonstrators want to rid Thailand of Yingluck and the influence of her Dubai-based brother Thaksin—an ousted billionaire ex-premier who is despised by a coalition of the southern Thai poor, the Bangkok middle classes and the elite.

They say he still controls the government from exile.

Firebrand protest leader Suthep Thaugsuban, who has vowed to destroy the “Thaksin regime,” dismisses Yingluck’s call for an election, saying it will install another Thaksin-allied government.

Addressing a crowd of tens of thousands at the city’s Democracy Monument, Suthep urged protesters to blockade the site where the Election Commission is due to hold party registrations from Monday.

“Whoever wants to go inside to register will have to pass through us,” he said.

“If we do not hold the country by February 2, we will shut the country down. No one will go to vote,” he added.

The self-proclaimed People’s Democratic Reform Committee is calling for an unelected “people’s council” to be installed to oversee sweeping but loosely defined reforms before new elections in around a year to 18 months.

Earlier several thousand people—mainly women—gathered outside Yingluck’s suburban house amid tight security, although the premier was traveling outside the capital.

Blowing whistles—the symbol of the weeks-long protests—and waving Thai flags, the crowd chanted “Yingluck get out!”

The premier, who was bounced into dissolving the house in early December after the Democrat Party resigned en masse from parliament, is in the northeast of the country—the heartland of her ruling party.

Analysts say Suthep’s bid is backed by powerful behind-the-scenes forces in a country which has seen 18 successful or attempted coups since 1932.

His movement was bolstered Saturday by the Democrats’ announcement of a poll boycott.

“If we don’t hold on to the democratic system, what should we hold on to?” she told reporters Sunday.

“If you don’t accept this government, please accept the system,” she said, adding elections would allow protesters to be heard at the ballot box.

Suthep led a boisterous march of several thousand people to Bangkok’s main commercial district, as demonstrators blocked traffic at several points across Bangkok— including at a symbolic intersection occupied by rival “Red Shirts” in 2010 pro-Thaksin rallies that ended in bloodshed.

Suthep, who was then deputy prime minister for the Democrat Party government, faces murder charges over the crackdown, which left scores dead.

Democrat leader Abhisit Vejjajiva has also been indicted for murder over the crackdown.

The Democrats have not won an elected majority in some two decades.

Their party previously boycotted elections in 2006, helping to create the political vacuum that heralded a military coup that ousted Thaksin.

Analysts say the current boycott could produce a similar outcome but also carries a major risk for the country’s oldest political party, which could face a wipe-out if the polls go ahead.

The protesters have appealed for the support of the army to overturn the government, which is holding out despite the enormous pressure on the streets.

But the military has indicated it will not step in directly at this stage.

Thaksin is adored among rural communities and the working class, particularly in the north and northeast. But the billionaire tycoon-turned-politician is reviled by the elite, who see him as corrupt and a threat to the revered monarchy.

Pro-Thaksin parties have won every election since 2001, most recently with a landslide victory under Yingluck two years ago.—Thanaporn Promyamyai