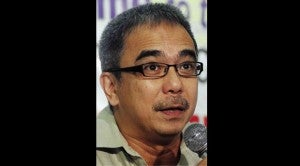 The country will be ushering in 2014 through “Juan Time,” a renewed government campaign to banish its notoriously tardy counterpart, “Filipino Time.”

With the passage of a law in May setting the Philippine Standard Time (PST), the Department of Science and Technology on Friday stressed that the time had come for Filipinos to make that “cultural change” by always being punctual.

“Time is a resource you cannot save for later. Time is a resource that is the great equalizer,” Science Secretary Mario Montejo said in a press conference in Quezon City on the first National Time Consciousness Week, which the country would observe from Jan. 1 to 7 next year.

The forum started promptly at 5 p.m., as stated in the invitation.

The DOST chief also announced the effectivity of the PST law’s implementing rules and regulations (IRR), which include provisions requiring government offices and broadcast media outlets to follow the PST.

“More than prescribing an official time by law, this is about a culture that we have to change, the so-called Filipino Time or the notoriety for being late,” Montejo said.

“We will start with government offices and public schools (through) synchronized flag-raising ceremonies on Mondays,” he added. “I think it is possible to change Filipino Time to Juan Time.”

The PST is set by the Philippine Atmospheric, Geophysical and Astronomical Services Administration (Pagasa), which displays it on its website http://www.pagasa.dost.gov.ph.

At exactly 5:45 p.m. on Friday,  Montejo unveiled a clock to launch the campaign dubbed “Juan Time, PST: Pinoy Ako, On Time Ako” and asked everyone in the audience to set their watches based on the official time.