UP student life goes on after supertyphoon 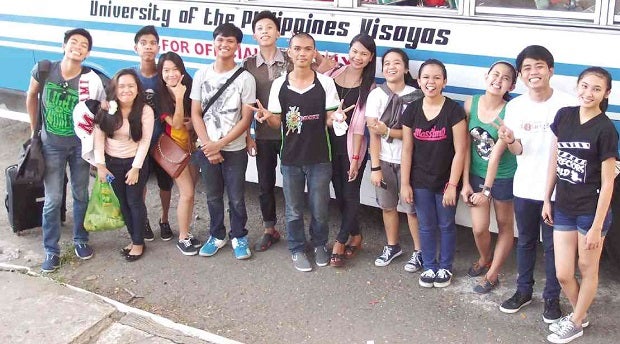 STUDENTS from the University of the Philippines Visayas (UPV) Tacloban in high spirits on the UPV campus in Iloilo City before their trip home. Photo by Nestor P. Burgos Jr.

It was a Christmas homecoming that Bret Michael Urmeneta thought couldn’t happen.

On Wednesday, he boarded a ship from Iloilo City to Cebu City and a boat to Ormoc City. He traveled by land to his typhoon-devastated hometown of Jaro, Leyte province, 42 kilometers from Tacloban City.

Urmeneta did not know what had happened to their house in Barangay Hiagsam after Supertyphoon “Yolanda” created a storm surge that swamped coastal communities in the province, but he was grateful to be with his family.

“I am thankful for all the help that made my going home possible,” he said.

Members of All UP Workers Alliance and faculty members of the University of the Philippines Visayas (UPV) in Iloilo City raised P4,300 to cover the round-trip fare and pocket money for the 24-hour trip.

Urmeneta is among the 60 UPV Tacloban College students who were allowed to cross-enroll at UPV in Iloilo City and in Miag-ao town, Iloilo province, after the typhoon severely damaged the Tacloban campus along Magsaysay Boulevard.

Three students and a staff member from UPV Tacloban died in the typhoon. Classes have been suspended until repairs are completed by January.

Urmeneta has been staying at the All UP Workers Alliance building on the Iloilo City campus with six other schoolmates. Another 21 were accommodated at the Gender and Development Program building, 23 at the Balay Ilonggo dorm, seven on the Miag-ao campus and two others with foster parents.

The UP administration has waived dorm fees and shouldered their meals at the school cafeteria.

Alumni, faculty and employees and other benefactors have also sponsored meals and provided financial and other support to the students.

The second of three siblings, Urmeneta said he was thankful that he could continue with his studies despite the damage to their house and the UPV Tacloban campus. He is in his fourth year as an accountancy student and will be graduating next school year.

“There’s a lot of expectation and hope for my family and community in my graduation,” he said.

His father is a jeepney driver. His elder brother is a welder while his younger sister is a first-year education student at Leyte Normal University in Tacloban. His mother has been paralyzed from the waist down due to an illness.

If he graduates, Urmeneta will be the first in his village to earn a UP degree.

“In our village, young people are expected to work after graduating from high school due to lack of opportunities and financial capacity to go to college,” he said.

Urmeneta turned 20 on Nov. 8, the day Yolanda ravaged Tacloban and other areas in the Visayas.

Strong winds destroyed the second of floor of the house of his aunt in Tacloban where he and his sister were staying. The storm surge flooded the ground floor.

Amid the debris, Urmeneta found P1,800 cash blown away to the terrace of the house.

“I did not know whom it belonged to. But I considered it a blessing on my birthday,” he said. He later used the money to pay for his fare to Iloilo.

He learned of what happened to his family in Jaro only three days after the storm when his father Gil arrived in Tacloban to check on the siblings. His father had to hitch a ride from Jaro to Palo town and then walked 20 km to reach Tacloban.

Urmeneta went home days later to their house, whose roof was blown away.

Even with the support from the UPV community and other benefactors, he has been augmenting his pocket money by working. He and another cross-registrant have been offering laundry services to other dorm residents for P30 per kilo. In one weekend, they were able to work on 30 kilos at the house of a volunteer foster parent.

Their basic and other needs though have been provided through donations. Among them were UPV high school students who canceled their Christmas party and donated their fund to the Tacloban students instead.

“Even if you have nothing with you, you can survive here because of the generosity of Iloilo,” Urmeneta said.

Katherine Cañeada, who is also a fourth-year accountancy student from UPV Tacloban, is thankful for the support of the academic community. “There have been so many blessings, more than what we could expect,” she said.

Aside from free dormitory stay and meals, her new classmates at the College of Management (CM) on the Iloilo City campus have lent her books and photocopied academic references.

The CM students have also launched a Meet a Friend from UPVTC program, a buddy-system effort to help the cross-enrollees adjust and cope with their stay in Iloilo.

“Our teachers have been so considerate to let us catch up and they have made it a point to speak in English and Tagalog instead of Hiligaynon,” she said.

Cañeada, 20, also lost her home in Barangay Santo Niño in Tanauan town in Leyte, 18 km south of Tacloban. Her family evacuated to Tanauan School of Craftsmanship and Home Industries the night before the typhoon.

But the classroom where her family was staying was struck by the storm surge with the water reaching chest-high. They were able to survive by tying together curtains and pieces of wood that they used to transfer to another school building.

She lost an aunt, three cousins and a niece. Two of her high school batch mates also died.

Cañeada will be spending Christmas with her family at the house of her uncle in Dasmariñas City in Cavite province because their house has not been repaired.

Her parents plan to return to Tanauan in January.

“I was apprehensive of going here because it’s my first time in Iloilo and I do not know anyone or have relatives here. We at first could not believe that there would be sponsors for our meals and other needs,” she said.

But she decided to cross-enroll so as not to face any delays with her course.

Like other students from UPV Tacloban, life has continued for Cañeada because of the support of strangers and new friends. They attended UPV’s traditional Lantern Parade on the Miag-ao campus on Dec. 17.

“We thought it would be difficult here but we have been treated like family,” she said.