William, Kate and baby Prince George head Down Under 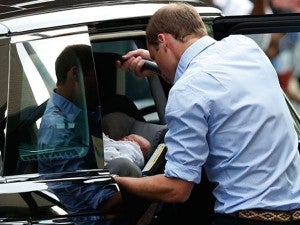 This is a Tuesday July 23, 2013 file photo of Britain’s Prince William places carefully the Prince George of Cambridge into a car, Tuesday July 23, 2013, as they leave St. Mary’s Hospital exclusive Lindo Wing in London where the Duchess gave birth on Monday July 22. Britain’s Prince William has described his joy at introducing newborn son to the world on the steps of a London hospital last month and about his nerves about fitting the car seat securely into the Land Rover before driving off. AP FILE PHOTO

LONDON – Prince William and his wife Kate will visit New Zealand and Australia in April, taking their baby son Prince George with them, palace officials announced on Thursday.

The long flight is likely to be a challenge with the little prince, who was born on July 22 this year, although William was the same age when he first visited Australia.

His parents Prince Charles, the heir to the throne, and Diana took the young William with them on an official tour of Australia and New Zealand in March-April 1983.

William, the second in line to the throne, has been Down Under several times since then, most recently in March 2011, but it will be Kate’s first visit to the region.

“The Duke and Duchess of Cambridge will visit New Zealand and Australia in April 2014” following an invitation from those countries’ governments, Kensington Palace said in a statement.

“It is anticipated that Prince George will accompany Their Royal Highnesses, but a decision will be made in due course.”

The couple were treated like celebrities when they visited Canada soon after their wedding in 2011, while last year they toured Singapore, Malaysia, the Solomon Islands and Tuvalu as representatives of Queen Elizabeth II on her Diamond Jubilee.