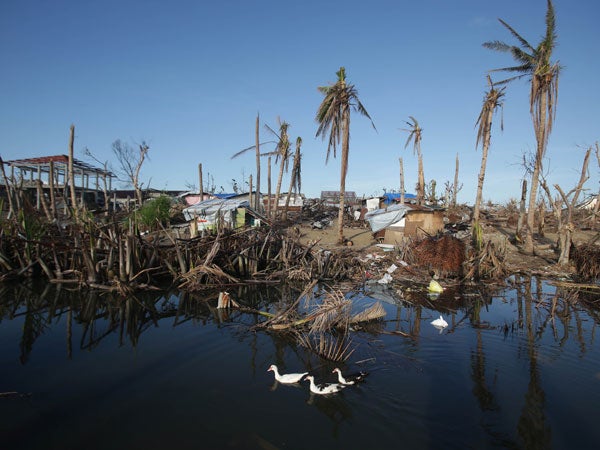 Ducks swim past damaged houses and trees at typhoon-ravaged Tolosa town, Leyte province, on Dec. 9, 2013. The Department of Environment and Natural Resources has finished marking “no-build zones” on the coasts of Eastern Visayas that were ravaged by Supertyphoon “Yolanda” to pave the way for the construction of “green walls” of mangroves and beach forest to protect against coming storms. AP PHOTO/AARON FAVILA

MANILA, Philippines—The Department of Environment and Natural Resources (DENR) has finished marking “no-build zones” on the coasts of Eastern Visayas that were ravaged by Supertyphoon “Yolanda” to pave the way for the construction of “green walls” of mangroves and beach forest to protect against coming storms.

Environment Secretary Ramon Paje said the 40-meter no-build zones from the coasts covered approximately 100 kilometers in Samar and Leyte provinces, although not all the areas would be subject to the restriction.

“There are areas where growing mangroves and beach forest is not applicable… there are places where infrastructure is more applicable, meaning dikes and breakwaters,” Paje told reporters.

“If the applicable measure is infra (infrastructure), then we’ll apply infra. When a green measure is more applicable, then we’ll use beach forest and mangroves. There’s no hard and fast rule because there are places where mangroves don’t grow,” he said.

“At the very least, the houses should be able to withstand storm speeds of 200 kilometers per hour,” he added.

The government has earmarked almost P350 million for a massive coastal rehabilitation of Eastern Visayas, particularly Leyte and its capital city, Tacloban.

The objective is to restore the region’s degraded coastal forests and make its coastlines less vulnerable to extreme weather events.

Under Presidential Decree No. 1067, or the Philippine Water Code, “banks of rivers and streams and the shores of the seas and lakes throughout their entire length and within a zone of three meters in urban areas, 20 meters in agricultural areas and 40 meters in forest areas, along their margins, are subject to the easement of public use in the interest of recreation, navigation, floatage, fishing and salvage.”

“Had the mangroves in Leyte and Eastern Samar not been decimated, the storm surge in those areas would have been dissipated by 70 to 80 percent of their strength,” said Paje, citing a study by the Department of Science and Technology.