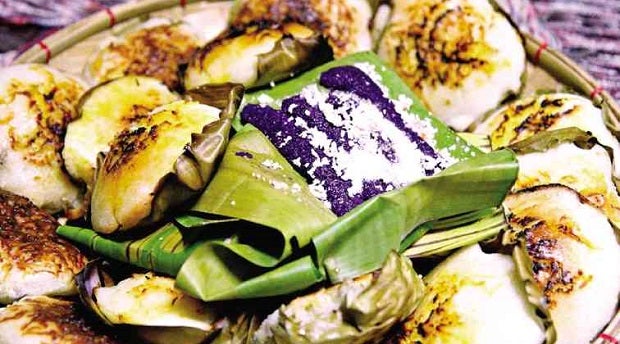 The age-old tradition of Misa de Gallo, a series of nine dawn Masses as countdown to Christmas Day, will not be complete without a bite of bibingka or puto bumbong.

In this capital city of Quezon province, for the past 32 years the business of selling bibingka in front of the St. Ferdinand Cathedral has become a family tradition for the Labitigan clan.

Lucy Labitigan-Villarojas, 65, says she started selling bibingka along San Fernando Street just across the cathedral in 1981 at only P3.50 a piece.

The bibingka, a mixture of pure rice flour, milk, sugar and baking powder, is poured into a clay pot lined with a sheet of banana leaf.

Strips of salted egg and cheese are added to the mixture. The pot is placed over a charcoal stove with another piece of banana leaf added to the top and covered with an iron sheet with hot coals.

It takes at least 15 minutes to cook the bibingka.

Once cooked, a spoonful of margarine or butter is spread on top of the hot bibingka, ready to satisfy the craving for the holiday delicacy.

When Villarojas shared to her four siblings—Teodolo, Irene, Ignacio and Virgilio—the bibingka recipe which she learned from her late mother-in-law Mercedes Gutierrez-Villarojas, her sister and brothers followed soon after and put up their own bibingka stalls beside her stall during the nine-day Misa de Gallo period.

“Everyone in the family is now involved, including our children and grandchildren. This has become the family’s contribution to Christmas celebration in Lucena and at the same time our extra source of money for the holiday season,” says Villarojas.

The Labitigan clan maintains 10 bibingka stalls in front of the cathedral. With the continuous hike on the price of ingredients each year, a piece of bibingka now sells at P20.

Aside from having her own bibingka stall, Villarojas also sells puto bumbong, another popular Christmas delicacy, which she placed inside a Styrofoam box covered with flour sackcloths to keep it hot.

The puto bumbong is sourced from another local entrepreneur. Younger members of the Labitigan clan also take part in the annual family tradition by helping their parents in the bibingka business or by selling puto bumbong beside the stall.

The annual business starts on Dec. 16, the first Misa de Gallo and ends on the last day of the traditional Christmas season dawn Mass on the 24th.

Misa de Gallo, a Spanish term that means a Mass held when the rooster crows, is usually done in all Catholic churches across the country as early as

3 a.m. to 5 a.m., a tradition started during the Spanish period when friars decided to hold pre-Christmas Masses at dawn to enable farmers, who needed to be at their farms at daybreak, to attend the traditional Catholic rite.

After the Mass, throngs of churchgoers rush to rows of fastfood outlets across the cathedral or join the long line of bibingka buyers at the stalls of the Labitigan clan.

“My eldest daughter, now a nurse in Saudi Arabia, longs for the taste of their fluffy and soft bibingka, her favorite since she was a child,” Maria Paz Reyes, a retired teacher, told the

Inquirer while she waited for her order after she attended the first of the series of Masses on Dec. 16.

Some clan members added additional ingredients to the original recipe to improve the product according to their taste, says Villarojas.

“We mix our ingredients individually. It is like we are having a contest on who has the most delicious and fast-selling bibingka,” she says.

Of the five Labitigan siblings, Irene Labitigan-Llamado, 55, has learned to make the business on the same street a year-round work.

“The business has been good to me. I raised my three children from selling bibingka,” Llamado tells the Inquirer.

She sells a “special bibingka” with extra slices of salted egg and sprinkling of grated cheese on top for P30 a piece.

“Sometimes, loyal customers bring their own toppings. If that’s the arrangement, the price of bibingka still remains at P20,” she says.

One of her daughters assists Llamado in her stall with six burning stoves.

Her other daughter, Maritess, also maintains her own bibingka store a few meters away from her mother.

Llamado starts preparing the bibingka mixture as early as 5 p.m. the day before.

Bibingka sellers say the business would be better if not for the high cost of ingredients.

Llamado recalls that last year, the rice variety that she used cost only P20 a kilo but is now priced at P42. The sugar that cost P18 a kilo last year is now P42; a box of cheese that used to cost P28 now sells at P52.

But despite the spiraling cost of ingredients, Labitigan did not change the P20 price tag of their bibingka.

She says they are afraid that if they hike the price of their bibingka, most of their poor townmates could no longer afford to have a bite of the popular Christmas food.

“We will be sorry for that. We all know that Simbang Gabi (Misa de Gallo) will not be complete without the bibingka. And we will not let that happen,” she says.

She vowed the Labitigans  will continue the tradition of offering hot bibingka for all Misa de Gallo goers in the years to come.