MANILA, Philippines—Militant group on Wednesday urged Justice Secretary Leila De Lima to investigate and file the corresponding criminal complaint against those responsible for the oil spill in Estancia, Northern Iloilo. 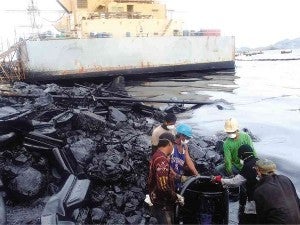 In their letter to De Lima, Pambansang Lakas ng Kilusang Mamamalakaya ng Pilipinas (Pamalakaya) said the government’s response to the incident is “disastrous.”

Among those agencies which they say had lackluster attitude in cleaning the oil spill include the Department of Energy, Department of Environment and Natural Resources and the National Power Corporation (Napocor).

The oil spill occurred a few days after typhoon Yolanda hit the Visayas region and forced the evacuation of thousands of residents in the area.

At least 200,000 liters of bunker fuel leaked into the shores of Estancia after the 35-megawatt National Power Barge 103 slammed into the rocky coast of the town at the height of the typhoon. Monstrous winds and waves dislodged the barge from its mooring about 200 meters from the coastline of Barangay (village) Botongon in Estancia.

The group said the incident would not have happened if only Napocor, who was informed four days before Yolanda hit the country, has moved the power barge that caused the oil spill.

Napocor has set a Dec. 6 self-imposed deadline but failed to meet it. The group further stated that government agencies have the “knee-jerk attitude” in acting on the problem.

“The inefficient and incompetent action of the national government, the Napocor and concerned government agencies led to further complications that worsened the situation and the problems arising from the uncontained oil spill and slow pace of clean up,” the group added.

Based on the assessment conducted by the United Nations Environmental Program (UNEP), as of Nov. 30, the shoreline of the Barangas Botongon, Estancia, Paon and Tanza have been contaminated by bunker oil washed ashore. The oil has been reported to have spread up to 10 km downstream.