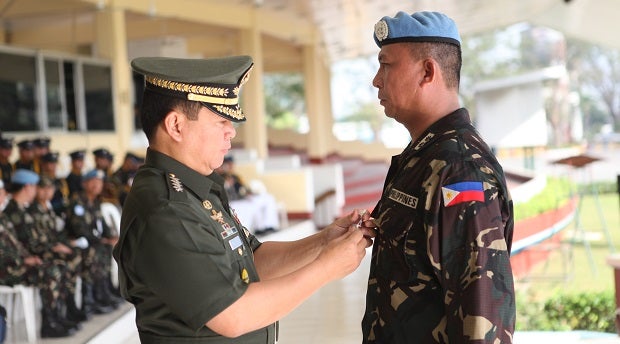 MANILA, Philippines – Over 400 Filipino peacekeepers who returned to the country after serving the United Nations peacekeeping mission in Liberia and Golan Heights were recognized in an awarding ceremony on Wednesday.

The peacekeepers were welcomed by the Armed Forces of the Philippines chief of staff General Emmanuel Bautista who also congratulated them “for accomplishing their mission despite constant threats on their safety.”

All the peacekeepers were awarded with UN Service Medals.

Twenty-five of the peacekeepers that served in Golan Heights, a ceasefire zone between Syria and Israel, were taken hostage early this year by Syrian rebels. They were taken hostage in two batches and were held for almost a week.

The first batch, composed of 21 Filipino troops led by Major Dominador Valerio, was abducted last March and held hostage for three days before the soldiers were released.

The team was on a supply run when they were stopped by Syrian rebels in Al Jamlah village.

Valerio recalled how they were able to befriend their abductors.

“I have proven that Filipinos can easily make friends. We earned their sympathies and as a matter of fact when we left they even got sad,” he told reporters.

He said the abductors wanted to talk about them about families.

“We talked about children. Nasabayan namin yun, so yun yung nagpalapit sa damdamin namin at sabi nila pag Pilipino good, yun yung pagkatingin nila sa atin (That’s what kept them close to us, that’s how they came to regard Filipinos as basically good),” he said.

The second batch of four peacekeepers led by Capt. Arlis Jardin, was abducted in May while on a reconnaissance mission. But Jardin said they were more ‘‘relaxed’’ at that time.  “They treated us well,” he told reporters.

At one point, Jardin recalled that they were even served chicken and rice.

The 332-strong 6th Philippine Contingent to Golan Heights was led by Lieutenant Colonel Nolie Anquillano. They served for one year, extending the usual six months of duty.

Meanwhile, the 115-strong 17th Philippine Contingent to Liberia, which was deployed in July last year, completed their mission of assisting in the maintenance of law and order. The all-Philippine Air Force contingent was led by Colonel Fidel Igmedio T. Cruz Jr.

A posthumous award was also conferred to Sergeant Benson Angot who died of malaria on October 22 while on duty in Liberia. His wife, Rodalyn Angot, received the award on his behalf.

The AFP chief said the Philippines would continue to serve the UN peacekeeping mission.

“Our deployment is continuous. It is our commitment to the United Nations. We will strive to be the best that we can to the UN peacekeeping activities,” he said.