Lacson vows to go after ‘natural thieves’ in Yolanda-hit areas 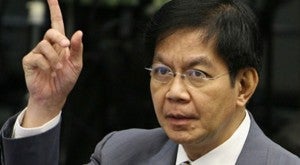 MANILA, Philippines – Rehabilitation czar Panfilo Lacson warned those behind anomalies in the handling of relief funds for areas devastated by Supertyphoon Yolanda (international name Haiyan) that he intends to call upon the police force to investigate them.

“I can call upon the Philippine National Police [since] I was previously [a PNP] Chief there, I can have investigated any anomalies that I see, which I intend to do,” Lacson told reporters in an interview after he attended the briefing on the reconstruction efforts for foreign delegates at the Department of Foreign Affairs (DFA) Wednesday.

Lacson called on those who he called “natural thieves” to give special consideration to the rehabilitation efforts and to not take advantage of it.

“Di ko man ma-advise sa kanila na magnakaw na lang sa ibang panahon, pero at least patawarin nila itong rehabilitation. (I cannot advise them to steal at another time but at least they should spare this rehabilitation),” he said.

Lacson urged representatives from foreign nations that have pledged aid for the rehabilitation to funnel the relief funds of their country’s foundations to private organizations in the Philippines admitting that it will be much faster.

“We cannot mix public funds with private funds. The private sector has their own auditing rules. I challenged our development partners, for their foundations abroad to funnel directly to private foundations here,” Lacson said.

“Let’s face reality, there is some slowness in the government because of the structure and system, that is inherent, we can’t do anything about it. If it’s through private [organizations], its much faster and more efficient,” he said.