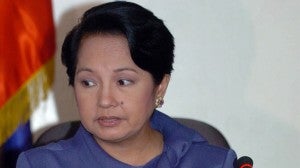 Former President Gloria Macapagal-Arroyo has asked the antigraft court to let her family spend Christmas and New Year with her in her suite at the Veterans Memorial Medical Center where she is under hospital arrest. INQUIRER FILE PHOTO

MANILA, Philippines—Former President Gloria Macapagal-Arroyo may not be able to be home for Christmas, which is why she is pleading with the Sandiganbayan to let her family spend Christmas and New Year with her in her suite at the Veterans Memorial Medical Center (VMMC) where she is under hospital arrest.

In a 10-page urgent motion, Arroyo asked the antigraft court to temporarily relax the new visitation rules imposed on her since the court has not acted on her petition for bail.

Arroyo said she was making her appeal in keeping with the “spirit of joy, hope, peace, love, compassion and goodwill prevalent during the Yuletide season and in observance of the revered tradition of togetherness, oneness and unity of the Filipino family during this season.”

Arroyo has been held at the VMMC for 14 months while facing trial for the nonbailable crime of plunder in connection with the alleged illegal disbursement of Philippine Charity Sweepstakes Office funds totaling P366 million.

Arroyo’s motion, filed on Dec. 13, also said her continued confinement at the VMMC would result in “permanently damaging her health and even endangering her life.”

The Police Security and Protection Group (PSPG) of the Philippine National Police, on orders of the antigraft court, began restricting visits on Dec. 9.

Arroyo said even her husband, Jose Miguel Arroyo, had been barred from spending the night with her at the hospital, and all her visitors, including family members, had to leave the VMMC by 9:30 p.m.

Arroyo’s lawyers pointed out that her husband’s sleep-overs were in compliance with the advice of her physicians that she needed spousal and family support to help her recuperate after three spine surgeries.

Arroyo asked the court to order the PNP to exempt members of her immediate family from the 9:30 p.m. curfew, saying they had their respective families and jobs to attend to and they only had their after-office hours from 6:30 p.m. onward to visit her.

She said the PNP had refused similar requests, which was why she was turning to the court.

Arroyo won’t be home for Christmas