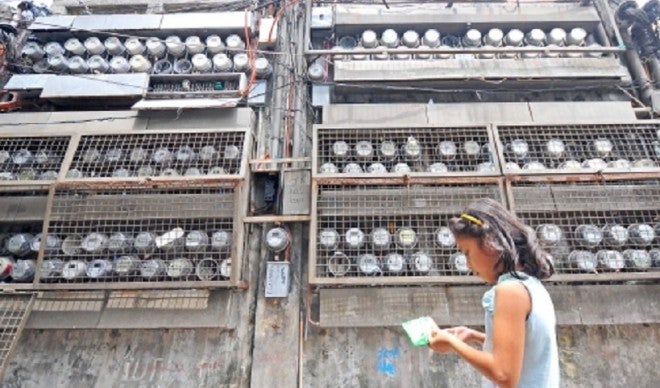 When generation plants went down for unscheduled maintenance from Nov. 11 to Dec. 10, Manila Electric Co. was forced to purchase more expensive electricity from the spot market controlled by the same power plant operators and pushing up a near tripling of the expected rate increase. INQUIRER FILE PHOTO

Power producers initially assured officials of the Department of Energy (DOE) they would meet the supply gap expected to be caused by the scheduled monthlong maintenance shutdown of the Malampaya gas pipeline, according to a DOE preliminary investigation report.

But when the Malampaya pipeline was shut down from Nov. 11 to Dec. 10, the DOE was caught flat-footed as power industry players failed to live up to their commitments.

Their generation plants went down for unscheduled maintenance during the period, forcing Manila Electric Co. (Meralco) to purchase more expensive electricity from the spot market controlled by the same power plant operators and pushing up a near tripling of the expected rate increase.

“The combined effect of Malampaya maintenance and unplanned outages [caused] tight and insufficient supply into the WESM (Wholesale Electricity Spot Market) resulting in price setting [by] oil-based plants,” said the DOE preliminary report, a copy of which was obtained by the Inquirer.

While the Malampaya pipeline was shut down, natural gas-using plants that supplied Meralco with power had to shift to more expensive fuel to keep on generating power, jacking up Meralco’s generation charge by P4.15 per kilowatt hour.

The DOE noted that the oil-based plants “cleared” the WESM with bids ranging from P20 to P62/kWh for nearly half the time during the Malampaya downtime.

The DOE listed the plants that cleared the peak of P62/kWh as Bauang, Therma Mobile (TMO) and Limay.

The DOE and the National Grid Corp. of the Philippines (NGCP) and Power Sector Assets and Liabilities Management Corp. (PSALM) held their first meeting on July 30 or more than months ahead of Malampaya’s scheduled preventive maintenance.

If the DOE did not intervene, Meralco’s blended generation charges would have doubled to P12.54 to P12.67/kWh during the Malampaya shutdown.

The DOE conducted two more “coordination” meetings—on Aug. 16 and Nov. 4—to ensure that the power industry players would live up to their commitments to keep major plants Malaya, Pagbilao and CBK (Caliraya-Botocan-Kalayaan) available during the period and for Meralco to sign a power supply agreement with Therma Mobile to reduce its dependence on WESM.

“An increase of P1.58/kWh is expected on the generation charge on the assumptions that First Gas (Sta. Rita and San Lorenzo) power plants will run on alternate fuel (light fuel oil); Ilijan on biodiesel and (Meralco’s) supply agreement with Therma Mobile,” the DOE said in its report.

Meralco ended up demanding a P4.15/kWh rate increase in its generation charge, which the Energy Regulatory Commission chaired by Zenaida Cruz-Ducut approved for collection over the next three months. The generation charge goes directly to Meralco’s power suppliers.

The DOE said the Malaya plant did not operate for the whole of November “due to commercial and technical reasons” and “which led to further supply scarcity.”

ACT Teachers Rep. Antonio Tinio said the three power generators—Limay Plant of Millennium Holdings Inc. owned by businessman Mike Valencia, Therma Mobile of Aboitiz Group, and Bauang plant of 1590 Energy Corp. of Vivant Corp.—raised their prices on WESM from an average of P13.74/kWh before the Malampaya shutdown to P33.22/kWh over the last four weeks.

“The predatory behavior is best illustrated by the behavior of Aboitiz Group’s Therma Mobile during this period. Initially, it had a short-term contract with Meralco to provide 234 megawatts (MW) of electricity at a cost of P8.65/kWh. However, Therma Mobile delivered only 100 MW at this price and chose to sell the rest of its capacity on WESM, resulting in the jacked-up prices,” Tinio said.

In a letter to the Inquirer, Aboitiz Group said its subsidiary, Therma Mobile, did not benefit from any WESM price movement “because it is paid an agreed rate under its power supply agreement (PSA) with Meralco.”

Susan Valdez, Aboitiz chief reputation and risk management officer, said the remaining 130 MW would be made available to Meralco by mid-2014 once the connection line was available.

“Under its capacity-based contract, Meralco has full control of the use of the 100 MW from TMO, including pricing and volume offers to WESM. TMO is paid only the rate covered by PSA and does not benefit from the high market prices,” Valdez said.

She said the ERC approved the rate.

Based on its findings, the DOE recommended an investigation of the “possible anticompetitive and abuse of market power behaviors of trading participants during the turnaround period.”

The ERC, the Department of Justice’s Office for Competition, and the House and Senate energy committees are conducting separate investigations of the supposed collusion among power producers and the huge power rate increase in Meralco’s franchise area.

Meralco’s franchise area covers 31 cities and 80 municipalities in Metro Manila and several provinces in Luzon, and is home to 24.7 million people, a fourth of the Philippine population.

In a radio interview, Akbayan Rep. Walden Bello said there was “strong evidence” of collusion against the power players who made a killing on WESM during the shutdown.

“There is regulatory capture, the regulator has been made captive by the regulated,” Bello said, noting the ERC’s complicity in the alleged conspiracy among industry players.

In a text message to the Inquirer, Bello said: “Circumstantial evidence is, I believe, strong. When six power suppliers to Meralco simultaneously go offline when Malampaya goes on maintenance and other plants owned by the same suppliers benefit from the massive price hike on WESM owing to sudden Meralco demand, it is hard to believe this is a coincidence,” said Bello.

He said Meralco should also share the blame for the fiasco.

“Where Meralco is to be faulted is in not building compensation for a power supply cutoff into its contract with suppliers and passing the added cost to consumers. In fact, it should have insured itself against such an eventuality. This is a massive management failure and the President should tell Meralco not to foist the consequences of its failure on consumers and to roll back its rates,” he said.

Bello said the Department of Justice should also probe whether Meralco actually had an insurance in place for these events.