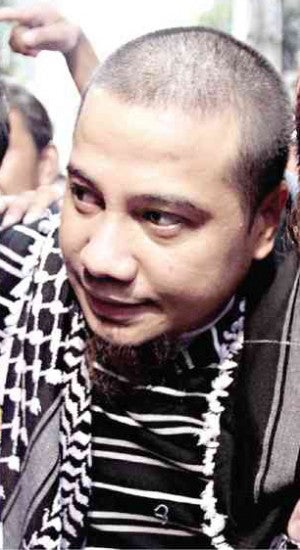 AFTER SPENDING 13 years in a Saudi Arabian jail, Dondon Lanuza returned to the Philippines in September to a life of uncertainty. GRIG C. MONTEGRANDE

An overseas Filipino worker (OFW) recently spared from the death row after spending 13 years in a Saudi Arabian prison for killing a Saudi national has found himself struggling against joblessness in his home country.

The joy of freedom is beginning to wane, said Rodelio Lanuza as reality bites him.

“I went to the [Overseas Workers Welfare Administration] last November. They could not offer me any job prospect. They [are giving an amount of] P10,000 for a reintegration program but this will be released only if I have started a small business,” Lanuza told the

Inquirer by telephone from his friend’s house in Bulacan on Tuesday.

Lanuza was freed through the kindness of King Abdullah bin Abdul Aziz and had been forgiven by the victim’s family. He raised part of the blood money through the help of Philippine officials and his years of campaign through social media.

He said he was forced to beg for work from the office of Vice President Jejomar Binay, who helped secure his release.

“I am trying to be employed gainfully because I want to be productive, to be able to sustain myself,” he said.

Since his return this year, Lanuza has joined the three million unemployed Filipinos since July when unemployment rose to 7.3 percent due to the growth of the labor force, government records showed.

According to the government’s monthly estimate, around 50,000 applicants could not get a job because their skills do not match labor market needs.

As a result, some 10.4 million chose to eke out a living abroad to support their families. Their overseas work now prop up the Philippine economy because the money they remitted in the last nine months until October reached an all-time high of $2.06 billion, Bangko Sentral ng Pilipinas data showed.

Lanuza said that was the same reason he pursued a job in Saudi Arabia on Dec. 9, 1996.

At 22, the architecture undergraduate landed a job as draftsman. He was promoted to quantity surveyor, and then to site inspector.

But jailed in his prime, at 25, he lost 13 years of his life serving a conviction for the murder of a Saudi national in 2000. He said he acted out of self-defense because the victim had tried to rape him.

Now 39, he also regretted not having enjoyed his young adult years.

Despite the ordeal, Lanuza said he did not want to dwell on the past.

“The kindness of many people is too much. I do not want to be wasting my life doing nothing for myself or fellow OFWs,” he said.

Binay said the government and supporters of Lanuza raised Saudi riyal (SAR) 700,000 of the SAR 3 million or almost P35 million blood money. It was the king who paid the rest of the amount.

While the job hunting has not yielded any prospect yet, Lanuza said he gets by with the help of his parents.

“Many tell me I inspire many. I stand out only because of how I dealt with my problem,” he said. “I have become stubborn and vocal about my situation unlike other migrant workers who tolerate how the government has dismissed our problems.”

“I hope the government can give me some consideration like Sarah Balabagan who was granted various opportunities,” he said, referring to another OFW in the United Arab Emirates who was saved from the death row in the 1990s.