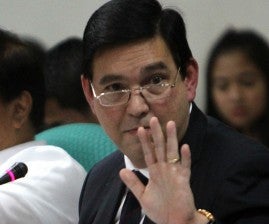 The collection, he said, was expected to hit more than P12 billion this year.

“Actually, all collections from road user’s tax must be spent for road safety. That’s the end objective. But there’s a provision in the law specifically setting aside 7.5 percent of what’s collected for road safety,” Recto said in a statement.

He was referring to Republic Act 8794, which tucks in a Motor Vehicle User’s Charge (MVUC) in every vehicle’s annual registration, based primarily on vehicle weight.

The Implementing Rules and Regulations (IRR) of the law state that 7.5 percent of total collections should be placed in a “Special Road Safety Fund” and allotted for “roadway improvements and repairs designed to reduce conflicts in traffic flow and the likelihood and severity of accidents.”

But Recto explained that the IRR also allows the fund to be used, not only for “traffic signals, markings, lanes, traffic channelization techniques, traffic calming measures”, but also for “road safety education and training programs.”

This IRR, he said, may be invoked by authorities in buying ambulances, which can be stationed in traffic-prone highways, patrol cars, which can run after overspeeding vehicles at night, and tow trucks to clear roads of stalled vehicles.”

The senator specifically noted the lack of equipment called “jaws of life,” the metal-cutting or -prying devices, which can extricate passengers out of mangled vehicles.

The MVUC payments, he said, should also be used to “light dark places especially tunnels and underpasses.”

It should likewise be used, Recto said, to pay for garage inspections of bus, taxi, truck, garbage truck companies that will conduct road safety seminars for drivers and “to check if tires are so worn-out that the vehicles on which they are installed are now accidents waiting to happen.”

“My point is that the carnage on the streets and the chaos on our roads should prompt a readjustment in MVUC spending.  The body controlling it should depart ‘from the traditional signs-asphalt overlay-reflectorized markers’ that once dominated its expenditure list,” said the senator.

MVUC spending is controlled by a seven-man Road Board chaired by the Secretary of Public Works and Highways. Its other members are the heads of the Budget, Finance and Transportation and Communications departments and three private sector representatives appointed by the President.

What is the road user’s tax?