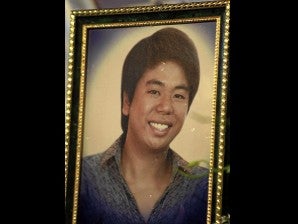 MANILA, Philippines — The parents of hazing victim Marvin Reglos and the families of the suspects are close to reaching a final settlement over the civil aspect of the case, according to the lawyer representing the victim’s family.

Dennis Pangan, counsel for Myrna and Lucito Reglos, said in a phone interview that the two sides have been reasonable in their talks, paving the way for what he described as smooth negotiations.

“No no. There are no problems at all,” Pangan said, adding a settlement could be finalized sometime in 2014.

This was confirmed by Myrna Reglos who said the families of all the suspects were pooling their resources together to come up with the financial compensation.

Neither she nor her husband, she said, has specified an amount though as they “(could) never put a price tag on the life of (their) son.”

She said the amount being collected was based on the discretion of the families of the suspects.

Once the “collection” was completed, she said the final amount would be subject to her and her husband’s approval.

Pangan added the final amount did not need the approval of Antipolo Regional Trial Court Branch 97 Judge Miguel Asuncion, who has been handling the case.

He said that for as long as both parties could iron out all the issues, then the civil aspect of the case would be deemed settled.

The hearings in court, which dwell on the criminal aspect of the case, meanwhile, would continue even if a settlement has been reached, according to Pangan/

Earlier, however, Pangan said that a settlement of the civil aspect of any criminal case could be interpreted as a loss of interest on the part of the victim’s family in pursuing the case.

Asuncion has set a date for the next hearing in January.

“Hopefully we have a settlement by (next year). For the peace of mind of all,” Pangan said.

In February 2012, Marvin, then a San Beda law freshman, was declared dead on arrival in a hospital after he sustained injuries allegedly sustained from hazing rites reportedly conducted by the Lambda Rho Beta fraternity in an Antipolo resort.

Several individuals affiliated with the fraternity were charged with murder under the Anti-Hazing law.

In February 2013, the only two suspects arrested in connection with Marvin’s death — Bojhee Yap and Erick Castillo — were granted provisional liberty by Asuncion, who said the prosecution had failed to establish that the then-San Beda law freshman died as a result of hazing in the first place.

Read Next
Mandela statue unveiled in South Africa capital
EDITORS' PICK
Geek out at TOYCON 2022 powered by Smart Signature
UK’s Boris Johnson will resign, BBC reports
High inflation: Your P1 is now worth only 87 centavos
High-risk pregnancy: Reducing your risk is in your hands
Unemployment rate up to 6% in May
House energy committee chair Arroyo bats for cheap electricity
MOST READ
Suspect in grisly killing of missing woman in Bulacan arrested
Kim Atienza’s daughter flaunts bikini body in response to critics of her ‘revealing photos’
Cop slain in Isabela ambush
FDA probes popular Filipino noodle brand for ‘high level of ethylene oxide’
Don't miss out on the latest news and information.