Read-along in Urdaneta: Introducing the carabao 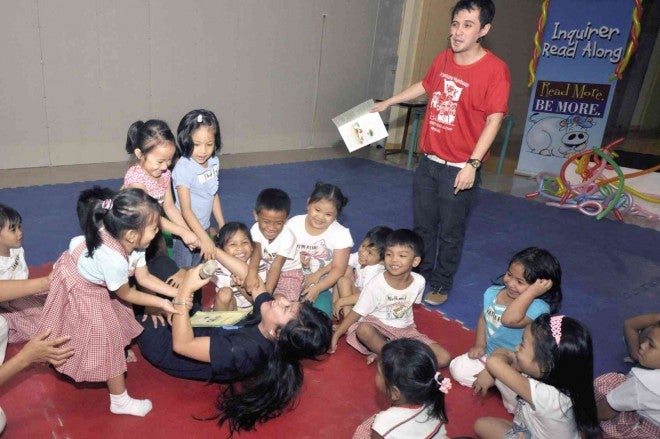 URDANETA CITY—There is one reason local officials and public librarians asked the Inquirer’s Read-Along team to hold storytelling sessions in this booming Pangasinan city: their love for the humble carabao.

Urdaneta’s official landmark is a granite statue of the carabao, which depicts the city as the “cattle capital of the Philippines.” Unveiled in 2011, the city’s official logo, featuring a cascading waterfall over its granite wall backdrop, pays tribute to the “beast of burden” for its strength, determination and resilience.

The carabao, Guyito, is also the Inquirer’s official mascot.

The city’s symbols have become convenient ways to introduce the carabao to the children through an interactive and fun storytelling session.

The read-along team conducted two storytelling sessions for 130 children from public and private elementary schools at CB Mall on Dec. 9, during the city’s weeklong fiesta celebration.

Reading from the story, “Alamat ng Kalabaw,” professional storyteller Rich Rodriguez asked: “What could have happened to Mara, the beautiful lass?”

Several children, ages 7 and 8, gathered around Rodriguez to take a peek at the book, eager to know about the girl’s fate.

Bernadine Gravela, the city librarian, said the children’s enthusiasm indicates they love stories and reading. “Librarians like us have learned so much from the Inquirer’s Read-Along program. We are more inspired now to continue to support the literacy program of our city,” she said.

She said the library conducts regular storytelling sessions for children and this has prompted the National Commission for Culture and the Arts to award it the top prize in the 2013 Search for Outstanding Public Libraries.

Four stories, which highlighted the value of respect, obedience, sacrifice and friendship, were read in the two sessions where the children also took part as props, crowd or bit actors on stage.

“Ang Magkaibigan,” a story about friendship between an ant and a dove, featured an ant character that was drowning, so the children tried to save her by dragging her into a leaf, played by a classmate who was wearing a green shirt. The story was written by Angelita Aragon and Lydia Lalunio.

The children also obliged when the storytellers asked them to take part in searching for the boy, Pilo, a character in the book, “Pilo Patago-tago,” by Kristine Canon and Leo Alvarado. The story deals with Pilo who loves to play hide-and-seek until he finds himself lost in the mall.

They also read the story, “Chenelyn Chenelyn,” which is about treating a house helper kindly.

Since 2003, the city librarians have been holding library summer programs in April and May for children. They conduct free computer training, sports events, crafts and cooking classes and story-writing contests.

“We also have a collection of original stories written by the students that we plan to publish,” Gravela said.