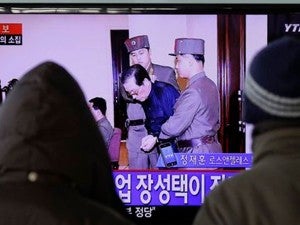 SEOUL, South Korea – The aunt of North Korean leader Kim Jong-Un appears unscathed after the shock execution of her powerful husband, following fevered speculation that those close to the young supremo’s uncle could be purged.

Kim Kyong-Hui, sister of late leader Kim Jong-Il, was named a member of the state funeral committee for a senior ruling party official who died on Friday, the state-run KCNA said late Saturday.

Her name was listed alongside a horde of top party and military cadres including defense chief Jang Jong-Nam and Choe Ryong-Hae, a close Kim Jong-Un confidant and director of the North Korean military’s political bureau.

News of Kim Kyong-Hui attending an official function indicates that she remains in favor with her nephew, who has been consolidating his grip on power since his father’s death two years ago.

Jang Song-Thaek, Kim Kyong-Hui’s powerful husband and political regent of Kim Jong-Un, was executed on Thursday for corruption and plotting to overthrow the state, among other charges.

His execution – carried out just days after he was ousted from all his party and military positions – marks the biggest political upheaval since the young Kim Jong-Un took power after the death of his father in December 2011.

Jang played key role in cementing the leadership of the young and inexperienced Kim Jong-Un. But the 67-year-old’s growing political influence and power was increasingly resented by Kim Jong-Un, according to analysts.

Jang and Kim Kyong-Hui were once regarded as the ultimate power couple in Pyongyang, as both held key positions in the ruling party.

But Kim Kyong-Hui, 67, has been less visible in the past year, with reports saying she was seriously ill and had sought hospital treatment in Singapore.

Analysts have warned the latest purge of Jang would extend to a large number of officials seen loyal to him.

North Korean businessmen in China have been summoned back in large numbers in recent days, according to Yonhap news agency.

The move appeared aimed at cracking down on those “classified as having connections” with Jang, who served as a key go-between for relations with China, Yonhap said Saturday citing unnamed sources.

However, Kim Kyong-Hui – one of a handful of people with blood ties to the ruling Kim dynasty – will likely escape any harsh treatment.

“The whole legitimacy of Kim Jong-un’s leadership is based on blood ties. And Kim Kyong-Hui has played the role of a spokeswoman that backs up the legitimacy of the dynasty,” said Lee Seung-Yeol, analyst at Seoul’s Ewha Institute of Unification Studies.

The political standing of Kim Jong-Un, who inherited power after his father’s death nearly two years ago, will be tarnished if his aunt is targeted, said Kim Kwang-Jin, analyst at the Institute for National Security Strategy.

“He (Kim Jong-Un) knows, if Kim Kyong-Hui’s is purged, it will also backfire to hit himself in the end,” he said.