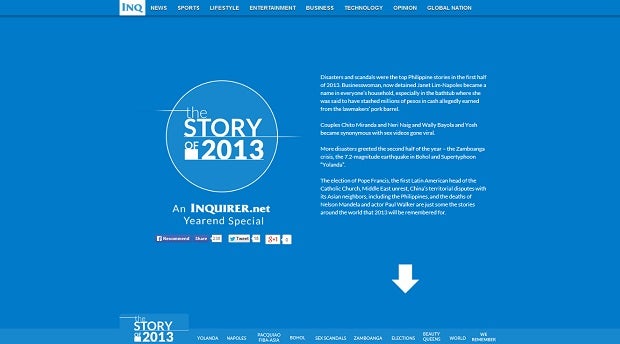 As the year draws to a close, Inquirer.net presents the story of 2013 as a new multimedia experience.

To adapt to the continuing rise of smartphones and tablets in the country, Inquirer.net’s yearender, titled “The Story of 2013,” may be viewed not only on laptop and desktop computers but also on any mobile device or operating system.

All the big news stories that made headlines and went viral on social media are retold in the yearender—complete with photos, videos and related links to help readers gain a full understanding of the events that shaped the year.

Undoubtedly the biggest stories of 2013 were Supertyphoon “Yolanda”  (international name: Haiyan) which left thousands dead in the central Visayas and the pork barrel scandal where up to P10 billion in legislative Priority Development Assistance Funds (PDAF) were diverted to fake nongovernment organizations headed by Janet Lim-Napoles.

Despite the country’s location on an earthquake-prone zone that rings the Pacific Ocean, the magnitude-7.2 earthquake that shook Bohol and parts of Cebu caught everybody off guard. In Bohol, the epicenter of the quake, centuries-old churches, schools and government buildings were severely damaged, changing the landscape of the island province.

Another jolt was the attack on the southern city of Zamboanga by an armed faction of the Moro National Liberation Front (MNLF). The standoff, which dragged on for three weeks, left 219 people dead, 181 wounded, and hundreds of thousands displaced.

Likewise grabbing headlines were the victories of boxer Manny Pacquiao and basketball team Smart Gilas Pilipinas, which uplifted the spirits of Filipinos all over the world.

On the Internet and social media scene, sex videos of musician Chito Miranda and girlfriend Neri Naig went viral. This was followed by another sex video that showed comedian Wally Bayola and EB Babe dancer Yosh.

In the region, China’s aggressive muscle-flexing increased tensions in Asia. The Philippines took the regional giant to an international arbitration court regarding conflicting territorial claims in the West Philippine Sea.

Elsewhere in the world, the year witnessed the election of the first ever pope from Latin America, Francis.

The yearender also pays tribute to those who passed away in 2013. They include global democracy icon Nelson Mandela of South Africa, prominent leaders such as Hugo Chavez of Venezuela and Margaret Thatcher of Great Britain, and  movie and television celebrities Paul Walker and Cory Monteith.