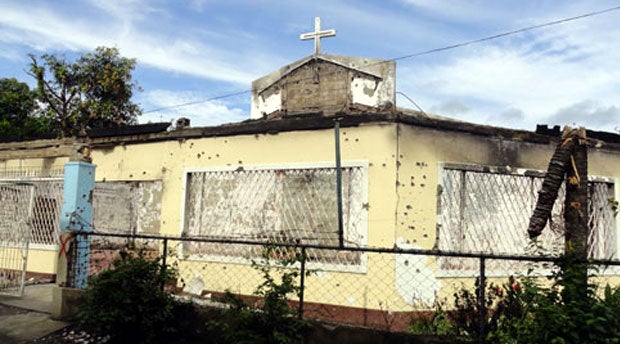 Christ the King Chapel in Zamboanga. Photo from http://asiafoundation.org

ZAMBOANGA CITY – Christian residents of this city’s Santa Catalina district found nothing unusual about Muslims bearing carpenters’ tools — until they realized the Muslims had volunteered to help rebuild a Catholic chapel.

But to the surprise of the mostly Christian residents, the Muslims, a number of them residents Zamboanga City who returned home from abroad recently, announced they had come to Santa Catalina to rebuild the Christ the King chapel.

Built in the early 1980’s, the chapel on Martha Drive was razed by one of many fires t6hat broke out during a three-week battle between government forces and a band of Moro National Liberation Front guerrillas loyal to MNLF founder Nur Misuari last September.

When the fighting ended, only the chapel’s back wall and altar were left. The 100-year-old wooden image of the Christ the King, which was regularly used in major religious processions here, did not survive the flames.

“We have not heard of any Muslim helping build a chapel before,” Villaflores said.

But before the Christians could say anything to the Muslims, they went to work, sawing lumber, driving in nails and doing other things to rebuild the chapel.

“We are very happy about it. Santa Catalina residents are deeply touched by their efforts. We really appreciate how our Muslim brothers and sisters are helping us,” Villaflores said.

He said that the help extended by Zamboanga’s Muslim residents, who suffered equally during the three-week siege, hastgened the rebuilding of the chapel.

“Barely a month since the work began our chapel is about 90 percent completed already,” he said.

Father Michael Ufana of the Saint Joseph parish said he was overwhelmed by what the Muslims had shown.

Ufana said these efforts did not only result in the speedy rebuilding of the chapel but also strengthened the harmonious relationship between Muslims and the Christians.

Ufana, along with his father, Isidro, sister Madelyn and other relatives were among those taken hostage when MNLF gunmen occupied Santa Catalina and other adjacent parts of Zamboanga City last September 9.

He admitted that like other Christians here, he felt some animosity toward Muslims in the past. But all of that has changed, he said.

“The way other Muslims painstakingly reached somehow eased this,” he said.

Retired police Chief Superintendent Sukarno Ikbala said he was listening to a live-streaming radio broadcast in the United States one day when he heard a  fellow retiree, Senior Supt. Julmunier Jubail, rallying Muslims to help in the rebuilding and relief efforts in the city.

Ikbala said from that meeting, they raised P120,000 from the Asia Foundation and from fellow Muslim Abdurahman Nuno. The money is now being used in rebuilding of the Christ the King chapel.

“We are also using our own resources. We give whatever we have in our pockets, and in due time we can complete the roofing of the chapel,” he proudly announced.

Jubail said what prompted him to call for action was the thought of how the Christian population viewed the Muslims after the siege.

“I did not want the general Christian community to look down on us as bad people because we were all victims,” he said. “We do hope that in our own small ways of reaching out, something beautiful will come out.”

“Not all Muslims are bad and not all Christians are good. The rebuilding of our chapel by the Muslims is indication enough that they were not bad and they want to lift our spirits and our hope [for peace],” said Rey Zaragosa, a 67-year-old resident of Santa Catalina.

Zaragosa said he was looking forward to the completion of the chapel so he could celebrate and attend Misa de Gallo there.