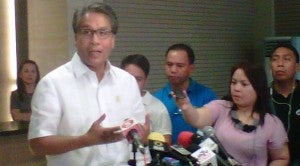 MANILA, Philippines—Two police generals who played major roles during the Zamboanga City siege and in restoring law and order in typhoon-stricken towns in the Visayas have been named to key posts in the Philippine National Police (PNP).

Ontog, a member of the Philippine Military Academy Class 1980, applied for early retirement after President Aquino tapped him to head the National Intelligence Coordinating Agency (NICA).

Interior Secretary Mar Roxas, who approved the reshuffle in the PNP, had assigned Rojas, then the PNP deputy chief for operations, and Valmoria, then the commander of the elite PNP Special Action Force, to lead the police operations when Zamboanga was attacked by Moro rebels.

The two PNP officials also flew to Tacloban City after widespread looting was reported in the city and other towns ravaged by supertyphoon “Yolanda” (Haiyan).

“This latest revamp gives us fresh leadership in the PNP. If you notice, those who had been appointed were (relatively) young police officials,” Sindac told a news briefing at Camp Crame.

He said PNP Director General Alan Purisima approved the new assignments upon the recommendation of the PNP Senior Officers Placement and Promotion Board.

Chief Supt. Benjamin Magalong had been named as chief of the Criminal Investigation and Detection Group (CIDG), the PNP’s primary investigation arm, replacing Director Francisco Uyami, who was designated as head of the PNP Directorate for Research and Development.

Police probe attack on another school exec in Zamboanga City