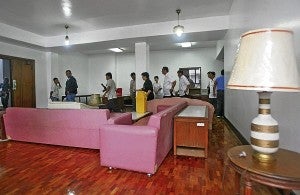 The Police Security and Protection Group under Chief Superintendent Roman Felix reportedly limited Mrs. Arroyo’s time for sunlight to an hour a day despite recommendations by her doctor to have at least two hours so she could heal faster.

Arroyo is afflicted with a degenerative bone disease on her neck.

The PNP also prohibited conjugal visits, barred her from walking to the chapel and attend mass unless authorized by the Courts. Mrs. Arroyo was reportedly allowed to attend Mass only if was officiated in her hospital suite and only in the mornings.

“This latest act of persecution betrays the malevolent and devilish nature of the Aquino Administration, notwithstanding its exertion of supreme effort to paint itself as having a humane and just governance,” Lawyer Ferdinand Topacio said.

“The apathy of the incumbent President towards victims of calamities, as shown by the fact that he has to be dragged by his handlers practically kicking and screaming to visit disaster areas, is only one facet of this wickedness; another is its continued persecution of its political opponents, and even in undertaking relief operations this government cannot divorce itself from partisanship,” he added.

Arroyo lawyers are studying the possibility of questioning the PNP.

In detention, Arroyo hasn’t lost her taste for ‘pork’