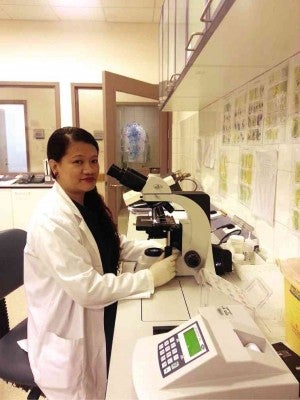 Mendiola at work in Kuwait.

Gelyn Mendiola finished high school with honors in 1999 but she couldn’t afford college.  Then Lyceum of the Philippines-Batangas told her about the scholarship program of Procter & Gamble (P&G) Philippines’ Safeguard and the Philippine Association of Medical Technologists (PAMET).

“I didn’t hesitate to apply because I believed I had what it takes,” says Mendiola. In March 2004, she passed the board examination. “I was in tears, jumping up and down because of so much joy … I thanked the Lord for such blessings and, of course, Safeguard and PAMET.”

Unlike doctors and nurses, medical technologists work behind the scenes.  They do laboratory tests for urine, blood, saliva and scraped cells, from simple to complex, to determine diseases like HIV/AIDS, cancer or diabetes.  Doctors use information gathered by med techs to diagnose and treat patients.

In August, the Commission on Higher Education identified medical technology as one of the in-demand and hard-to-fill jobs.  This assessment was based on current manpower demands and labor market studies.

In 1989, Safeguard and PAMET teamed up to improve Filipino health and hygiene.  They also started a scholarship program to support the most promising med tech students.

“The scholarship is a great avenue to encourage students to take up medical technology,” says PAMET president Romeo Ignacio, “as medical technologists from the Philippines are in high demand.  As hospitals and laboratories in the United States find it cheaper to send some of their core and noncore medical processes overseas, our medical sector is growing by the day. [The Philippines has]  a huge pool of highly skilled med techs with the ability to work with different ethnicities. The similarity in health systems makes med techs trained in the Philippines comfortable in US labs.”

The program has awarded more than 300 scholarships. Grantees, who get full tuition, are chosen based on academic accomplishments, sociocivic participation and leadership skills, as well as a willingness to raise awareness about the profession.  The selection process is rigorous.

“I never envisioned myself as a laboratory scientist,” says Randy Gran. “I saw myself wearing a white lab gown with a stethoscope around my neck, doing rounds, checking on patients.”

Gran’s family is not wealthy, so he applied for the grant.  “Many people say medical lab science is the best premed course,” he says,  “so… I took this for my bachelor’s [degree].  I promised… not to fail my family, the organization that gave me the scholarship and, of course, myself.”

“I will forever be thankful to PAMET and Safeguard for helping me realize my dream, my parents’ dream,” he says.  “The people behind the scholarship grant, from the events coordinator and the PAMET officers to the P&G people, made graduation memorable.”

Though he did not achieve his childhood dream of becoming a doctor, Gran is proud of his work as a clinical laboratory scientist.  He now works at e-Lab Polyclinic and Laboratory in Davao City and has been accredited by the American Society of Clinical Pathologists.

When he was 2 years old, Ernesto Quider Jr. lost his mother.  Brought up by his agriculturist father, the youngest of five children was “determined to succeed.”  In elementary, he was accelerated in his studies although he relied on financial aid.

Quider has led the development of start-up private health organizations and has helped in the accreditation of private hospitals, medical centers and clinical laboratories in the United 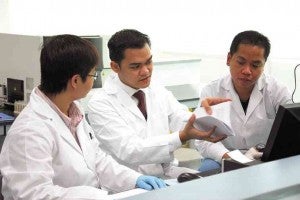 States.  In 2011, he became a voting member of the Clinical and Laboratory Standards Institute in Pennsylvania, tasked to publish new laboratory guidelines.

Reach for your dreams

“My journey has not been easy,” says Gran.  “During the licensure exam review, I was stressed by thoughts of failure.  But I did not lose sight of my goal, so now I can say that my journey has been spectacular.  It was an uphill climb but it was all worth it.”

“To aspiring professionals and financially challenged scholars, it is not impossible to reach for your dreams,” says Mendiola.   “Your hard work will pay off.  I am privileged to help not just Filipinos but people from different nations.  I’m proud to be a scholar.  I’m proud to be Filipino.”

E-mail the author at blessbook