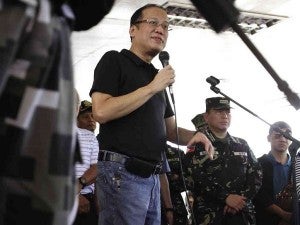 MANILA, Philippines – The satisfaction rating of President Benigno Aquino III’s administration dipped by 10 points based on a recent survey by the Social Weather Stations (SWS).

The survey, conducted from September 20 to 23 among 1,200 respondents, showed that the administration’s satisfaction rating remained “very good” but went down from +66 in June to +56 in September.

Among the specific issues tackled in the survey, the biggest drop was seen in the Aquino government’s handling of issues pertaining to poverty: ensuring that no family will be hungry (from +57 in June to +54 in September), fighting inflation (from +18 to +8), helping the poor (from +57 to +54), and providing jobs (from +38 to +36).

Reconciliation with Muslim rebels was also an issue where the administration rated lower, from +29 to +25 in September. It was during September that the Zamboanga City siege happened.

The result of the recent poll is the lowest that the administration received since May 2012’s +50 satisfaction rating.

The survey had sampling error margins of ±3% for national and ±6% for area percentages.